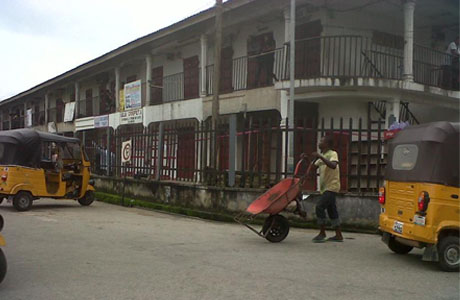 Officials of the Cross River State Board of Internal Revenue (CRSBIR) accompanied by over fifty armed security men drawn from the Mobile Police Unit, the Army and the traffic enforcers from the Department of Public Transport DOPT, in the Governor’s office, today took over and sealed the vehicle spare parts market at Goldie Street by Bassey Duke near Bedwell Street in Calabar.

Gun trotting security men were spotted as early as 7a.m. this morning by residents and traders who were resuming for their routine activities. Operation vehicles and red ribbons were used to cordon off the area as shop owners were angrily turned back by armed security men and men of the DOPT.

Passers by who attempted to take photo shots of the scenes were chased away by the armed security men. Shop owners too who tried to approach the security men were bullied out of the way. A crossriverwatch reporter managed to take a few shots of the men of the DOPT from hiding.

Mr. Uche Okafor, an Executive of the Motor and Motorcycle Traders Union at Bedwell told crossriverwatch that “our market has been sealed by the Inland Revenue Service. They came this morning with Mopol, Army, Police and DOPT carrying guns as if they were robbers. They were threatening every body that has a shop at the market. They would not even allow us come near them talk less of talking to them”.

Mr. Okafor confirmed that notice had been given to traders in the market over two months ago informing them of impending increase in their rents but that the amount it was increased to is too much for the traders to pay. “over two months now, we got notice that the money we are paying for our shops will increase. Last year a 12 by 100 size shop was rented for N5000 and smaller ones for N3,500 and N3, 000. But this year, government is asking us to pay N150, 000 for a 12 by 100 size shop. Is that not too much? I know that our Chairman has met with the government to settle this matter but I don’t know why they are now doing this. We tried to approach them and talk to them but some of the revenue people are telling us that Federal Government has collected Cross River oil wells and given them to Akwa-Ibom; that the State needs revenue and if we cannot pay, we should return to our Anambra and Akwa-Ibom. Is that the right thing to say”?

But the Chief Press Secretary to Governor Liyel Imoke, Mr. Christian Ita, told crossriverwatch that “what the Inland Revenue officials went for was not rent. It was Personal Income Tax. In the past, whoever was in-charge will go round and the traders will pay, may be N5, 000 or just anything once a year. This year, a Personal Assessment Form was sent to each of them to assess themselves but the traders insisted that their union should enter negotiations with government on the matter. But we don’t think that personal income tax is a union issue”.

A cross section of respondents on the ground that a crossriverwatch reporter spoke to off recorders, fearing the heavy presence of security men, accused the government of highhandedness. Andrew Obom, who said he is a legal practitioner, said repeatedly that government had no reason to use force in a matter that was purely a civil matter. Whatever it is you want to collect from the traders, at what point does the law permit government to unleash armed security men on a market? He queried.

By CrossRiverWatch Admin The acting director, alumni relations of the University of Calabar, Dr. Dorn-Cklaimz Enamhe says he hopes

As we continue to broaden the conversation around leadership in the age of personalization, it is trite to remember

Calabar River Kidnap: Ayade, Police Silent As 12 Remain In Captivity After One Week