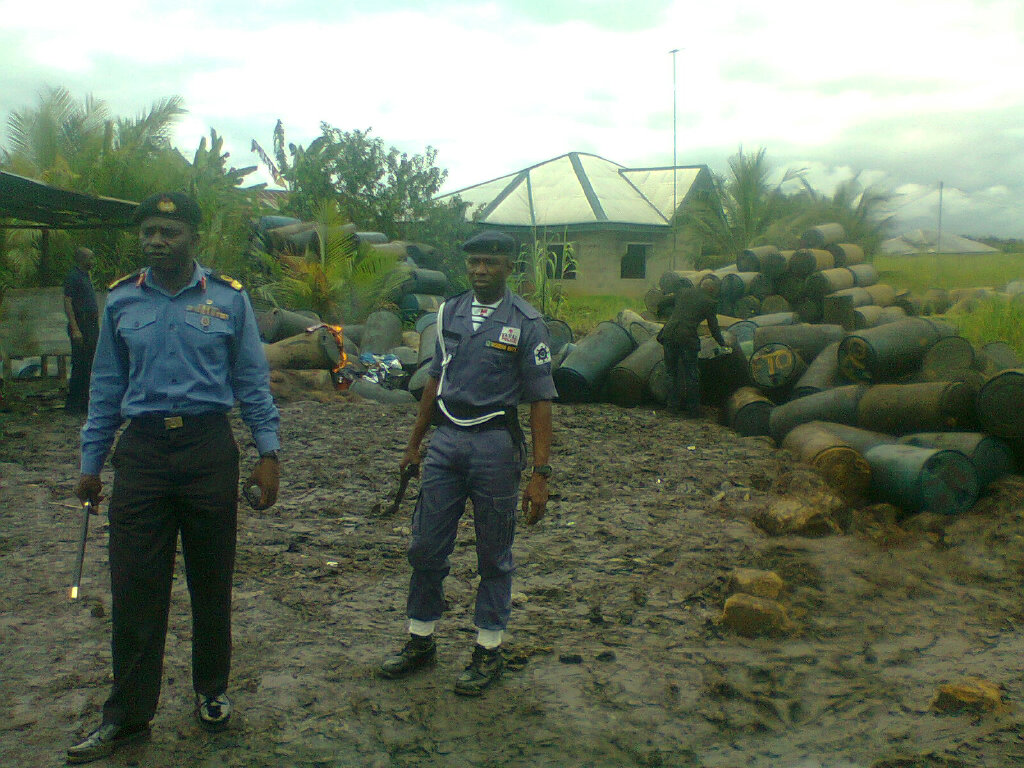 The Joint Task Force set up to stop illegal bunkering and piracy in the Eastern Water ways at the weekend burnt over 100, 000 litres of diesel worth millions of naira, destroyed three boats used for the business and arrested six persons suspected to have hands in the bunkering business.

The JTF codenamed Operation Pulo Shield led by the Commanding Officer, Nigeria Navy Ship Victory, Calabar, Navy Commodore Kingdom Itoko raided the hide out where the bunkering business was thriving at Bay Side and Jebs Street in Calabar and burnt several GP tanks containing diesel allegedly kept by the bunkerers.

At Bay Side, six persons, four males and two females were arrested in an ancient one story building used by the colonial masters which serves as one of the warehouses of the bunkerers, while the perpetrators of the illegal business took to their heels at Jebs Street leaving their cloths and shoes when they sited men of the task force.

Speaking before burning the bunkering products, Commodore Itoko said that not only the products would be burnt, but also the building to serve as deterrent for others that would like to indulge in the nefarious activity, stressing that the mandate given to the task force by the Federal Government is to destroy all illegal products.

Itoko said, “As part of my duties for the stoppage of illegal bunkering, oil theft and pipeline vandalization, I am here to effect arrest of illegal bunkerers and their collaborators and the residents of this illegal building that custody illegal AGO. This is a crime and we are committed to stop it.”

Though, the six persons arrested claimed not to know anything about the business, he said, “the perpetrators are very prominent who most times use these boys even when we make an arrest and even when the boys are arrested, they are not forthcoming to mention their sponsors. The arrested persons will be handed over to EFCC for prosecution.”

Also commenting on the operation by the JTF, the State Security Adviser, Mr. Rekpene Bassey said that the Governor Liyel Imoke’s administration was committed to stop the bunkering activities in the state which he described as economic sabotage.

“The other point is there is a clear case of coloration between the act of illegal bunkering and gangsterism and even cultism, the perpetrators of this act will go a long way in the extent of procurement of arms and ammunition to protect their business and of course in a bid to protect their business they will have clashes with others in the business or element they will consider enemies to the business.

“They will try to use these arms and ammunition to protect their business and at the end lives are lost, properties are damaged and towards the end the loses will be colossal and this is not something Cross River State government is going to encouraged or allow to happen in any form whatsoever.”