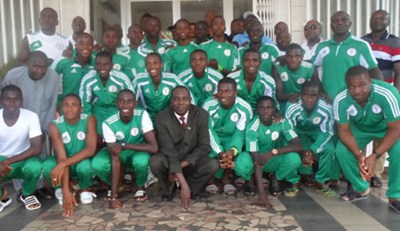 The Nigeria Football Federation (NFF) has finalized arrangement for the Golden Eaglets to resume their closed camping in Calabar next week after concluding the two-week screening exercise of new players at the NFF/FIFA Goal Project Center in Abuja on Friday.

Senator Liyel Imoke, the Executive Governor of Cross River State, last week sanctioned the return of the Golden Eaglets to Calabar to fine tune their preparations for the forthcoming 2013 FIFA World Cup in the United Arab Emirates as the NFF is leaving no stone unturned in the quest for the team’s successful outing.

Eaglets vs Ivory Coast during the group matches

Tayo Egbaiyelo, the Golden Eaglets’ Team Secretary, informed that a pool of players from the squad that nearly conquered the continent at the 10th African Under-17 Champion-ship in April with their counterparts picked from the screening exercise and officials are due in Calabar on Monday, July 22 to continue their build-up for the championship to be held between October 17 to November 8.

In a related development, members of the Golden Eaglets’ crew are enthusiastic about building a formidable squad that would make Nigerians proud at the 2013 World Cup following a well successful screening exercise.

Coach Siji Lagungu, Technical Officer at the NFF who is charged with the responsibility of organizing the screening, said he was happy with the quality of players spotted since it would boost competition for shirts amongst the players.

“ I’m happy with what we have been able to do within the last few days since the coaches were able to pick some players that are capable of adding values to the team we already have on ground,” said the former Nigerian international who was famous for his dazzling wing play in his heydays. “At this level, there is no limit to the amount of players you can have a look at until the final team is picked and this would help the coaches to have a strong pool of players for the task ahead.”

Assistant Coach Nduka Ugbade equally expressed the same opinion, saying the screening exercise has been a huge success: “I’m really impressed with what have seen so far at the screening and there is no doubt that some of these players can help the cause of our team at the World Cup,” added the Golden Eaglets’ assistant coach who incidentally captained Nigeria to win the maiden edition of the FIFA Under-16 World Cup in 1985 in China.