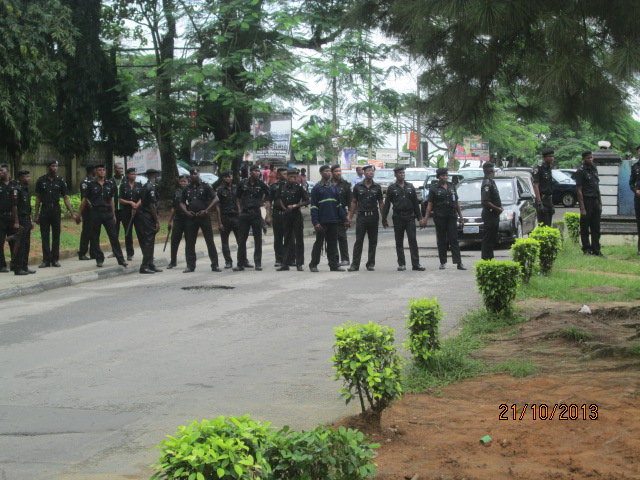 Hundreds of heavily armed police drafted from formations around Calabar, the Cross River State capital on Monday barricaded the main gate and other entrances to the University of Calabar to stop members of the Academic Staff Union of Universities, ASUU from carrying out a planned city walk.

The police, led by an Assistant Commissioner of Police in charge of operations, , Nnange Itam took over the entrances to the University of Calabar as early as 6am to carry out what they called order from above.

“We have instructions to stop the lecturers from marching out of the university premises to the city because they could be attacked by their students who are angry over the prolonged strike and the market women who the other day protested to express their anger with the teachers” Itam told CrossRiverWatch.

He said the lecturers are free to carry out any demonstration or action within the confines of the University “but marching outside this place would not be allowed and we have spelt out that to the leadership of the union.” he said.

“This is the final battle to save education in our country and the city walk was to go round major cities in Calabar to clear the air on the blackmail and misinformation carried out by the Federal Government that ASUU was on strike for their selfish interest and personal aggrandizement which is not true”.

He said the lecturers are not demanding for increase in salary as the people are being made to believe but that ASUU is asking for the implementation of the other nine items on the Agreement the union had with the Federal Government in 2009.

“Out of the ten items on the Agreement between the Federal Government us in 2009, only one item has been implemented and that is salary increase for the lecturers, so if the issue is on salary increase we would not be here but we are asking for the implementation of other nine issues amongst which is the improvement on the infrastructure in our universities”.

Reiterating the essence for the transformation of the sordid infrastructure in the universities, Ikpliya said it has come to a situation where “Students who are studying physics and chemistry do not know what a Bunsen Burner is and what a tripod looks like; it is this terrible situation in our universities that ASUU is fighting for and the Federal Government is calling it politics.”

“Any government that does not pay attention to education is a failure and no hunger policy can drive us back to the classrooms to face the same situation that we are protesting against; from the action of this government that is terming ASUU fight for better infrastructure in our universities for the children of the market women as politics, the Jonathan government is a failure”.

Also speaking, Professor Festus Iyayi, the past Chairman of ASUU, said government is being intransigent by refusing to obey an Agreement that the Secretary to Government, Pius Anyim personally drafted on behalf of government and assured would be implemented by the latter.

He said Anyim personally drafted that Agreement that every year the government would release the sum of 400 billion naira for the development of infrastructure in the universities but government later reneged saying what was agreed was 100 billion naira”.

He said, “Our negotiation took three years, 2 months ago we had a committee meeting in the Senate convened and presided by Mrs. Chukwu Merije and I was shocked when Pius Anyim got there and claimed ownership of the document but when we began talking about the content he said I put in that document 100 billion Naira to be provided to the Education sector and Mrs. Chukwu Merije asked him if he did not cross check the document because in her copy it’s 400 billion Naira that is written, where did your one hundred billion come from?

“Anyim then turned to us and said ASUU you people are intellectuals I believe you can help him find a way to explain how the figure changed, after that meeting we had several other meetings which was all set up by the enemies of educational progress. Even when we met with the Vice President of the country Arch. Namadi Sambo, he pleaded for us to return to classroom saying that when he was the Governor of Kaduna State he did a lot for the education sector, that they will give us the 500 billion Naira but it became clear that he is part of the game the government is playing.”

He described the governor of Benue State as a contractor, “The governor of Benue State, Mr. Gabriel Suswan is a scandalous contractor even when the money was far from materializing he had already proposed and recommended several contractors to build hostels in our tertiary institution with 1.4 million Naira per bed space and he boosted that he has already built such in his institution which is outrageous and when we presented it to the Vice President he promised to look into it but nothing has been done. People keep saying that ASUU should call off the strike but none is telling the Federal Government to keep its part of the bargain which its own secretary drew.

“The road is tough but we must get there, many will be injured but the sacrifice is worth it even if it means driving my car as a taxi I will, just to care for my family until the right thing is done. The hunger tactics used cannot stop us but let’s keep the ball rolling, let us not stop until we achieve our goals because it is the only thing we can do now to salvage our educational system and save our country’s future.”