Torrential Down Pour Sweeps Bridge Away in Yache 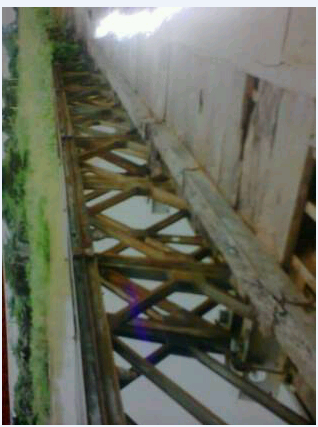 The bridge constructed with wood and iron railings during the colonial era had for a long time become a rickety death trap after several decades of serving as the only link between the people of Yache and Okuku the suburban town in the area.

A source in the area, Mr Matthias Oko, a former journalist with the Newswatch told CrossRiverWatch that many villages inhabited by several thousands of people have been cut off effectively plunging them into further poverty as they cannot take their agricultural products to the Okuku market.

“And those who have to get to Okuku which is some three kilometers away when the bridge was in place have to go through Gabu which effectively doubles the journey with the attendant bad road”.

The bridge which serves as a link between the people of Benue and Yala was constructed by colonial engineers to enable colonial officers ride through on their bicycles to tour surrounding villages and was later widened to allow pick up vans drive through to the villages to evacuate agricultural crops from Yache and the adjoining Benue villages to the Okuku market for onward movement to major towns like Abakaliki, Calabar, Kaduna and Lagos.

“As I speak to you now, thousands of people have been cut off from the rest of Yala and for those who want to get to Okuku or Ogoja to sell their agricultural produce; they have to go through Gabu which doubles the jourmey for them”. Oko said.

The road which is one of the worst in the state is muddy and swampy and makes movement a hazardous task for bikes and bicycles which are the only means of movement able to navigate the road this time of the year.

“No car dares come this way for now as the road would not allow it go beyond the entrance to the first village” Matthias said.