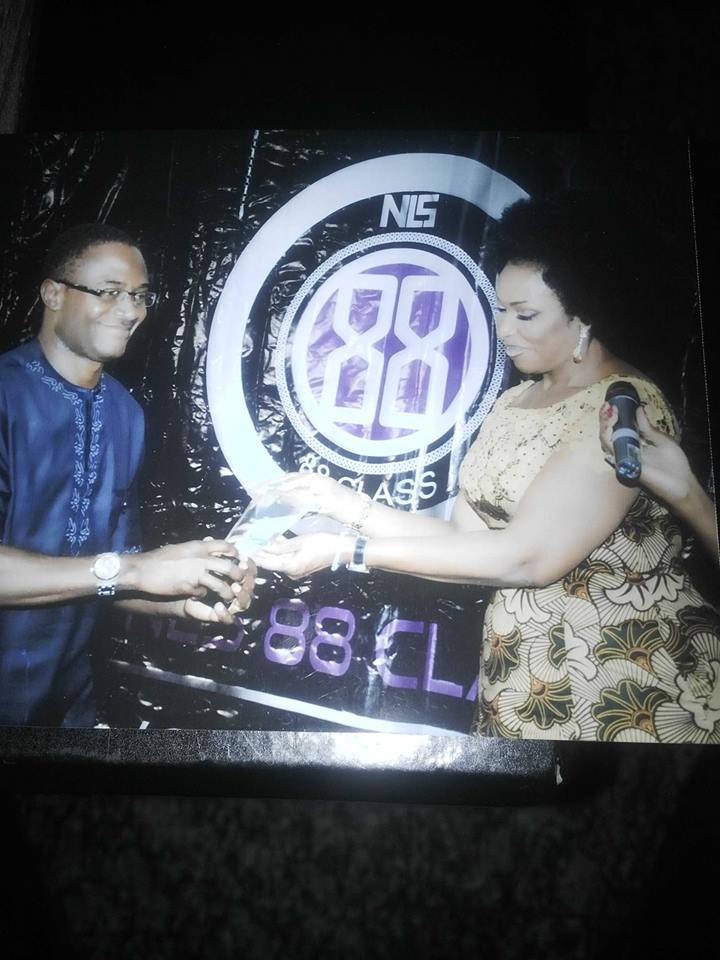 Law School Class of “88 on Saturday in a dinner held at the Tinapa Resort, Calabar, the Cross River State capital honored eighteen members of the class with awards of distinction.

One of the recipients of the award is Barrister Venatius Ikem, the former Chairman of Obudu LGA, former National Publicity Secretary of the PDP and Commissioner for Works in Cross River under Senator Liyel Imoke.

He received the award for distinguishing himself in his career and service to the people having occupied notable positions of service since his graduation from the Law School twenty-five years ago.

The award was presented to Mr. Ikem by the Cross River First Lady, Mrs. Obioma Liyel Imoke in a colourful ceremony at Tinapa.

Mr. Ikem thanked the class for recognising his humble contribution to the state and country by giving him the award and promised to continue to be of service to the people and to keep the light of the Class shinning.

The event which was attended by two of the three serving governors of the class, Senator Liyel Imoke of Cross River State, Obong Godswill Akpabio of Akwa Ibom State, Senator Ayim Pius Ayim, the Secretary to the Federal Government and Oba Victor David Otauru Olagbegi, the Oluwo of Owo, Ondo State, raised the sum of 143.7 million naira at the close of event.

The host of the event, Senator Liyel Imoke, the Cross River State governor said the event which is taking place twenty five years after the set passed out of Law School is a jubilee celebration which should make everyone reflect on the past and future of their lives vis-a-vis that of the country as it prepared to celebrates its Centenary this year too.

Senator Imoke said the class which has members from all over the country which is a reflection of how great Nigeria is today. “The Nigerian Law School Class of “88 has achieved so much success and as we celebrate our 25 years of post Law School experience, we celebrate not just the class but what Nigeria is today; a collection of different ethnic groups and nationalities in one great land”.

He said he got the mandate of the class to attend the event and had to make the pledge, which is the highest in keeping with the status of the class as the most successful of the classes that have passed out of the school.

“The Class of “86 attempted to compete with us but we kept raising the bar and when we got to 150 million they succumbed so we have to raise the money fast to enable work start on the ICT project soon”.

The Akwa Ibom State governor who conducted the fund raising activities said one person could have raised the entire sum and hand it over but every member of the class had to be given the opportunity to participate in the building of the ICT which is to express their love and commitment to the institution that moulded them.

“Today the Class has produced three serving governors, Senate President, Deputy Speaker House of Representatives, Chief Justices of state, judges and I dare say some members of our class are billionaires so we have to give everyone the opportunity to express his love for their alma mater.”

COVID-19: No Corps Member Tested Positive In Cross River – NYSC, Says Commissioner May Not Be Aware

By Emmanuel Unah, Vanguard Newspaper Workers of Cross River Basin Development Authority, CRBDA, have revealed that nothing was planted