The Herd Mentality in Cross River State BY OBONO OBLA 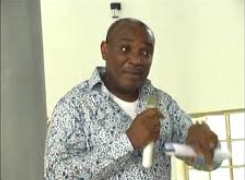 I unabashedly belong to APC. There is no doubt about that. I do not belong to PDP. So somebody may argue that the problem of PDP in Cross River State should not be my headache and business.

I am talking about the draconian, undemocratic and dictatorial removal of my friend, Dr. Sandy Onor from the caucus of the PDP because of his principled support for the ambition and aspiration of Godwin Jedy Agba by Governor Imoke.

I am bothered with the happenings in Cross River PDP because I consider myself as a freedom fighter. I therefore take any infringement of the fundamental right of anybody as an attack on the very essence of humanity which I will certainly consider as an in fraction of my own right.

Human rights are rights handed and bestowed on us by the creator and so when anybody’s right is infringed, I take it as an attack on the foundation of society and personally. This is why the law vests on each and every one of us the right or locus standi to fight against anybody that infringe on the human right of our neighbor. We must never treat infringement of the rights of our neighbors by anybody as the business of that neighbor whose rights was infringed on.

This is because doing nothing will surely embolden the perpetrator. The perpetrator will surely come when he has finished with your neighbor. This is precisely what happened in Nazi Germany. When Hitler was abusing the rights of the Jews, the Catholics, Ukrainians and other groups pretended as if nothing was happening.

However no sooner than Hitler finished with the Jews that he came ferociously against the Catholics and Ukrainians!

How can Dr. Sandy Onor be removed simply because he decided never to be part again of the herd that Governor Imoke and his PDP have foisted on Cross River?

The chicken has come home to roost. The crude tactics that has been deployed and employed against the opposition since 2003 is now manifesting in the PDP. These tactics used against the opposition are now been unleashed to hound supporters of those who think and believe that Governor Imoke should not single-handedly decide who the next Governor of the State should be.

Let Imoke allow members of the PDP to nominate the candidate of their choice. Let Imoke respect humanity by not imposing his whims and caprices on his fellow party members.

Members of the PDP should arouse from their lethargy and rescue their Party from the throes of unbridled dictatorship.

However I thank Dr. Onor for his principled stance against the cult of personality being practice in the State PDP whereby the words of the Governor and his wife is law.

This is how APC was hounded and prevented from taking part in the last local government councils in the State under the guise that the Party was not registered 90 days before the election.