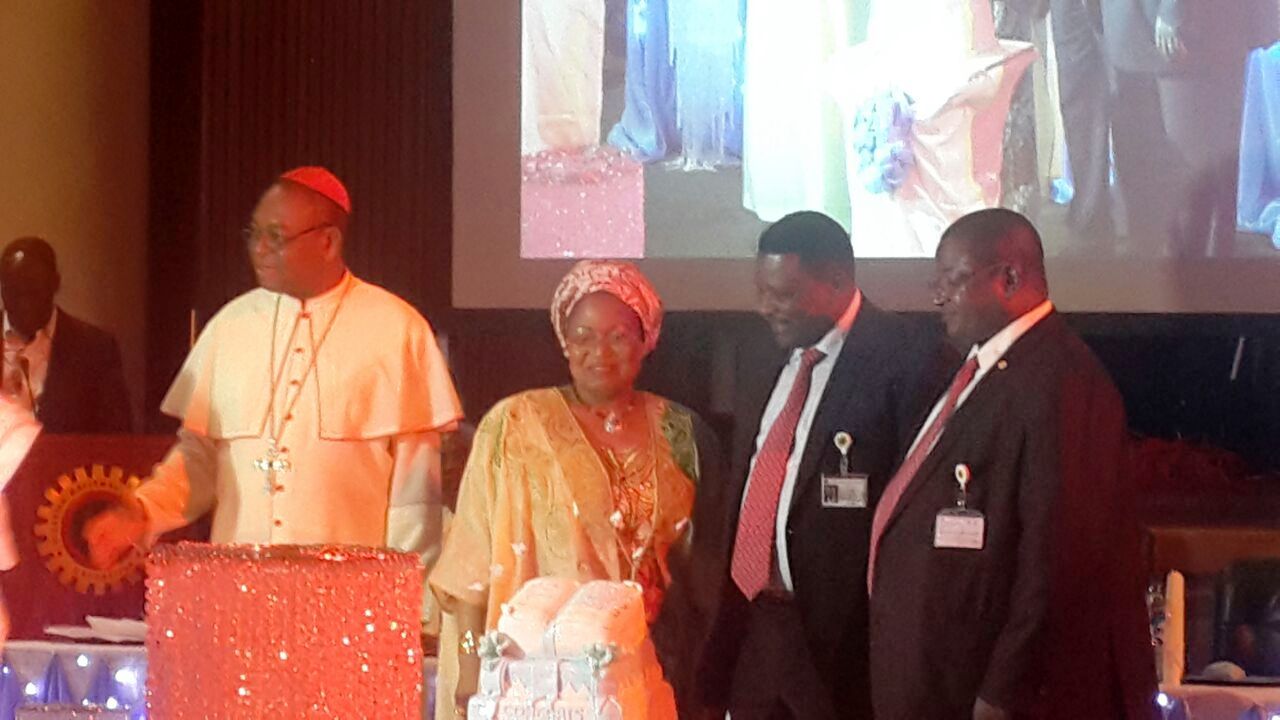 “I met Jedy Agba long ago. The first time I called him was from Warri when I was having problem with something on the job. The way and manner he quickly promised to fix it and the urgency with which he solved the problem attracted my attention and since then I have taken note that he is a very diligent and competent worker. I do not wish people like this to leave the NNPC but at this juncture we cannot keep him anymore, he wants to leave and we have to let him go. That is the reason I suspended every other thing to be here today, I usually don’t do this for everyone.”

These were the words of Mr. Andrew Yakubu, the Group Managing Director, GMD of the Nigerian National Petroleum Cooperation, NNPC today at the thanksgiving service in honor of Mr. Goddy Jedy Agba at the St. John Catholic Parish, NNPC Abuja.

The thanksgiving service which was officiated by the Arch Bishop of Abuja, John Cardinal Onaiyekan also saw a large turnout of dignitaries who heaped accolades on the exiting Group General Manager, Crude Oil Marketing of the NNPC, Mr. Goddy Jedy Agba, OFR.

The Group Executive Director of the NNPC, Hajia Aisha Abdulrahman Okene also praised Mr. Jedy Agba’s initiative while he worked in the NNPC and applauded his capacity to initiate and executive innovative policies that positively affected the fortunes of the NNPC.

Mrs. Rose Essiet, a Senior Manager in the Crude Oil Marketing Department told the audience that she was happy that her path crossed that of Jedy Agba as she not only benefited from her official role with him but also from quality advice on general issues.

The officiating minister, John Cardinal Onaiyekan who is also the Arch Bishop of Abuja, in his message noted that it is not only when we are called to do religious work that we are serving God. He said God is still in the business of calling people to work and bring positive change in their communities.

The Cardinal who acknowledged the good work Jedy Agba has been doing both for the Church and in his place of work, the NNPC, admonished him to continue the good work in any other capacity God is calling him to go and serve and always put the interest of his community and the people he is being called to serve at the utmost.

In his response, the outgoing NNPC, GGM who was obviously overwhelmed by the outpouring of emotions and accolades told the crowd that the urge to reach out and do good comes to him naturally.

“From all the amazing things I am hearing about myself here today, particularly from the Cardinal, I am almost feeling like the Cardinal wants to make me a saint. But very frankly, everything that people have said here that I do, I do them naturally. There is no prior intention or motive.”

He thanked everyone for finding time to come and celebrate with him as he vacates his position after a meritorious period of service to the NNPC which earned him a national honor of Officer of the Federal Republic, OFR.

He holds a Master Degree in international Law and Diplomacy from the University of Lagos, Akoka in 1989.

He thereafter joined the services of the Nigerian National Petroleum Corporation (NNPC) in 1993 as Head, Market Research in the Crude Oil Marketing Division (COMD). He rose to the rank of General Manager, (Commercial) of the Corporation from July, 2009 to March 2010.

In April 2010, he was appointed Group General Manager, COMD a position he held till his voluntary resignation to join the race for Peregrino House come 2015.

One commentOn Accolades As Jedy Agba Resigns From NNPC