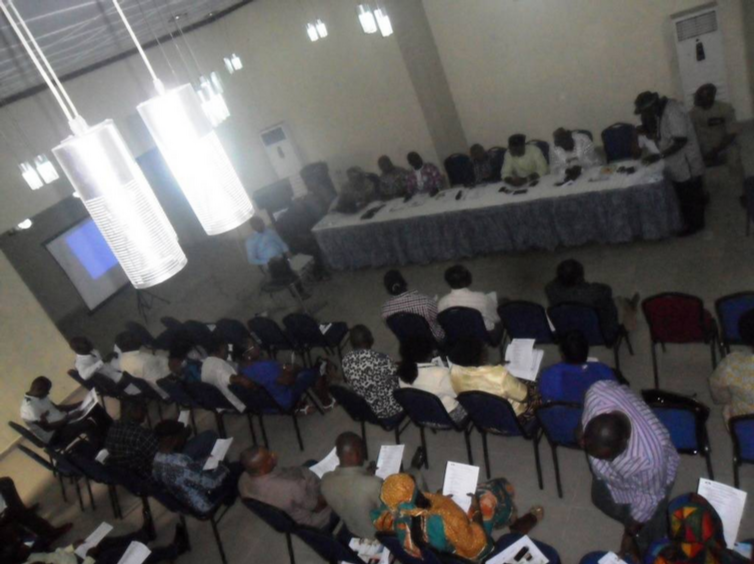 Members of the Akpabuyo Caucus of the ruling People Democratic Party, PDP in Cross River State have rejected the party’s southern senatorial district questionnaire/score sheet headlined: “Criteria for screening governorship aspirants” which was handed to caucus members to rate the governorship aspirants in the 2015 election.

At the chapter’s screening of the aspirants which held last Tuesday in Axari hotel Calabar, caucus members took turns to vehemently reject the initiative which came after the form was presented to each of them with specified instructions which they considered may hunt them after they exercise.

Two top PDP Akpabuyo caucus members that are part of the present Liyel Imoke administration whose names would not be mentioned took their turns early and openly rejected the idea of rating the aspirants arguing that some of the items on the form were intangible and could not be quantified.

The seven point assessment form included, Ability/Capacity, Relationship with the PDP family, Understanding of government policies and programs, Accessibility/Accomodation, Loyalty, Popularity and Appearance/Personality and several sub headings under each item and caucus members were expected to rate the aspirants from 1-3 with the following keys: 1 for Low, 2 for Average and 3 for High.

But most of those who spoke against the format said it could become a tool that may be used against them in the future while others said the exercise should just be an interaction with aspirants who are coming to present their manifesto to the party in Akpabuyo.

“It is impossible to quantify the seven items on the questionnaire we are expected to fill as a report card for the aspirants, it is only in individuals minds that such score should be made.” One of the speakers protested.

A Nation In Search Of True Leadership: The 1966 Coup D’etat! BY OGAR EMMANUEL

Exactly 55 years at the wee hours of Saturday 15th January 1966, the nascent nation – Nigeria, was rocked