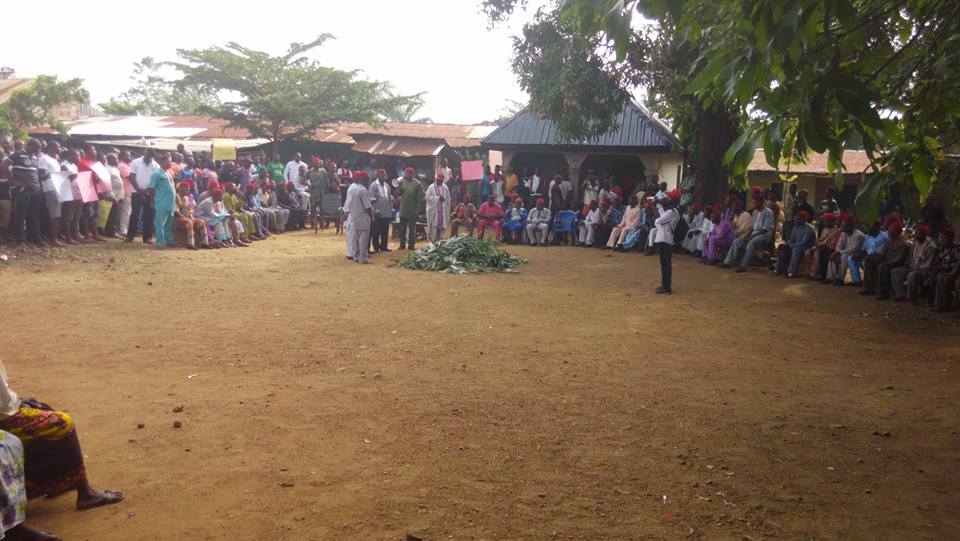 Traditional leaders in the Bette speaking axis of Obudu local government area, Tuesday, carried out a traditional cleansing of the land and sensitization in a bid to put an end to the menace posed by gangsters of late.

The cleansing which according to Chief Felix Okudare is a longstanding tradition and norm amongst the Bette clans when faced by situations that do not augur well with the community was part of the outcome from a meeting of the leaders who sat on an earlier date to extensively discuss issues affecting the local government the traditional way.

Okudare who says the traditional cleansing forms a part of the entire cleansing, averred that “Normally in those days when we use to have problems, our forefathers use to gather in a particular playground, one of eminent importance to pray to the gods. We are gathered here today as a reflection of what our fathers used to do to call on the almighty God to help us.”

In a similar vein, Utsu Patrick Ishoja described the event as the right way to go and explained the reason behind their decision.

“The entire Bette nation decided to come together to say no to this ugly situation in Obudu. It is very ugly to hear that a man who eats with his fellow brother later goes to kill him, it does not augur well with the Bette people that is why we came together to chase this things away”

“We are going to cleanse our land traditionally, we are using our sacred leaves, (Bizu) kolanut and others to do the cleansing which normally happens on our market days” Utsu Ishoja said.

The cleansing according to Emmanuel Akwagiobe who is the Community Relations Officer to Governor Ben Ayade in Obudu is “part of a wider scale approach to curb the menace of cultism” even as he expressed optimism that this will be very effective since the traditional leaders know their kith and kin.

The event which began at Bebuagam playground along Ogoja road took the chiefs who wielded Bizu (sacred leaves) and a host of other youths across major streets in Obudu.