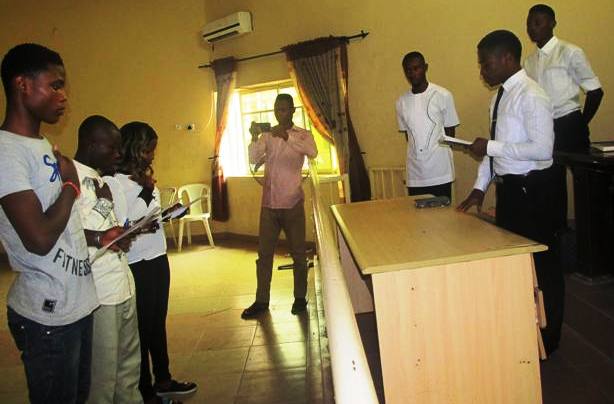 The Nigeria Union of Campus Journalists, Unversity of Calabar Chapter (NUCJ-UNICAL) has inaugurated its 2016/2017 Executive to pilot the affairs of the union for the next academic year.

Speaking at the event, the Managing Editor of CrossRiverWatch, Archibong Jeremiah urged those present to support the new administration to achieve its goal.

The former President of the union, Cross River State College of Education, Awi/Akamkpa chapter advised them to further build their capacity by undergoing assessed internship at media houses asserting that lots of opportunities can be there.

However, he frowned at those in the union who do not have the zest to take up a career in journalism as he asked them to drop their membership and give space to others who are meant to be there.

On his part, Emmanuel Umoh life member and a former President of the union, said he is impressed with the strides of the past executive of the union and urged their successors to lead by example.

He said, “Instead of waiting for rehabilitation, where there is misunderstanding, strive for reconciliation because NUCJ, a press union, is as well a spiritual body”.

He advised all and sundry to support and serve as at when needed and due for the betterment of the union.

The Electoral Committee Chairman, Endure Onun earlier while speaking commended the efforts of the immediate past executives for their hard work in keeping the union going.

Also speaking the Emeritus President of the union, Nnabiget Oke, admonished the union members to work in unison to be able to achieve their goal and also implored them to take particular interest in investigative journalism.

Anietie Moses, the Vice and Acting President, in her acceptance speech promised to work hard for the betterment of the union and also called on fellow members to join hands with her.

Those elected and inaugurated include the Vice President, Secretary General and Financial Secretary while other offices are vacant with a bye-election to be conducted on an unscheduled date to fill them up.