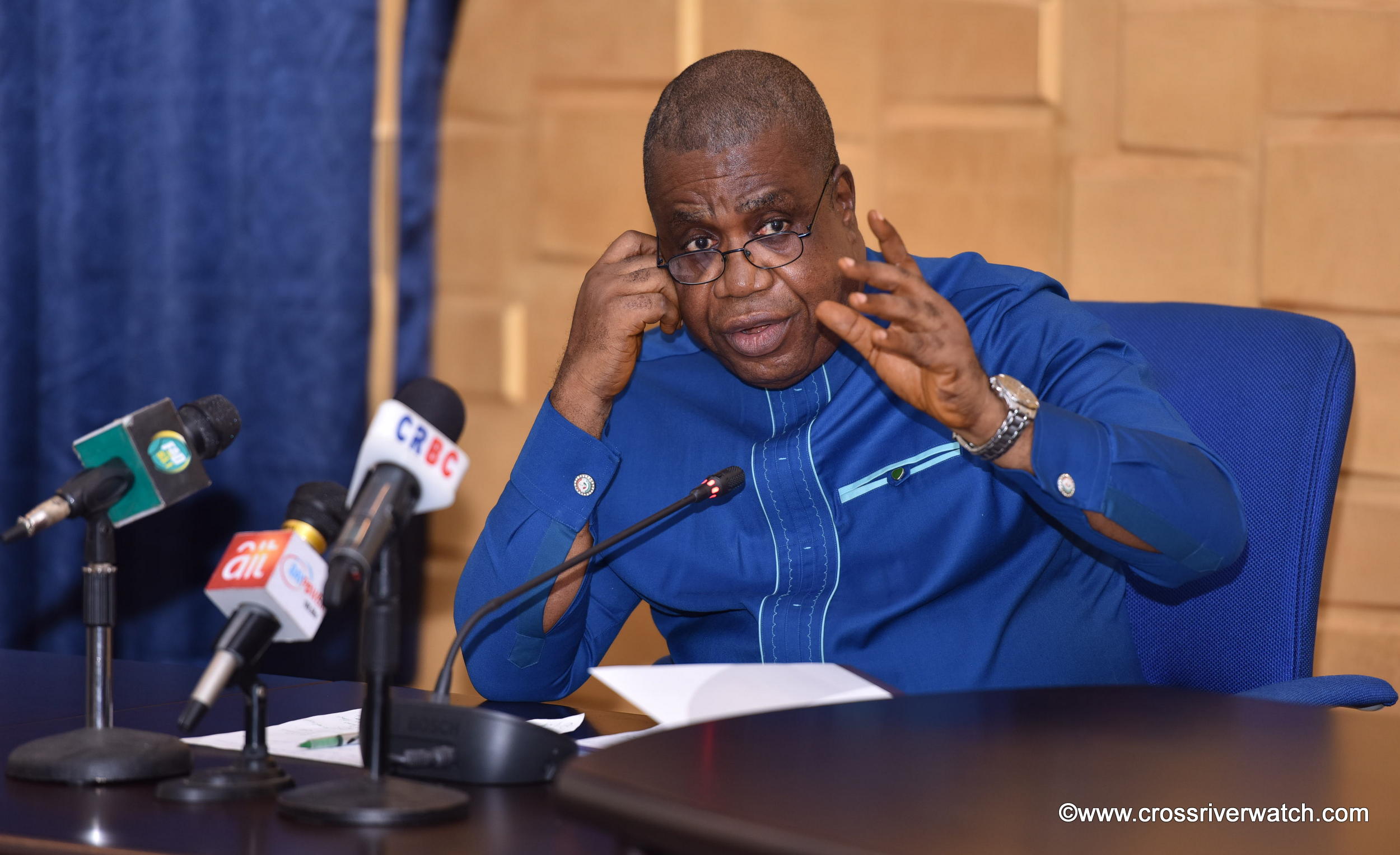 The Cross River State government says it will commission a panel of inquiry into the crisis rocking the Erei communities of Biase local government area which has claimed about three lives so far.

The deputy governor, Professor Ivara Esu stated this during an assessment visit to the communities where he also preached brotherliness among the warring communities.

And, at Urugbam, Esu who said he was happy that he had visited the community announced that the state was “going to set up a panel of enquiry,” adding that: “You have provoked me to action on this matter and we are going to investigate these.”

He described the loss of lives as “unnecessary,” wondered why the Urugbam community failed to play its role as a leader due to the fact it was centrally positioned among other things and maintained that; “A situation where all the other communities have gone against you, it does not speak well of you.”

At Ipene, he warned against the peddling of rumors that the Ebonyi state government is arming people to fight neighboring communities in Cross River and urged them against reprisals, stressing that in the absence of government, the security agencies were always available even as he wondered why the largest single community in Biase was at war with itself.

“Erei cannot afford to be going back, you have always taken leadership. Let the rascals among others be taken back. For Erei, it is forward ever and backward never,” Esu said and commended them for sheltering the displaced people of Egbor community which was allegedly sacked by the Urugbam community and announced that the state will continuously strive to provide for the needy.

At Abanwan, Esu said that the Erei group of communities had too many notable personalities to engage in warfare and stressed that it was a disgrace to their sons.

All the communities visited had a different narrative to the events that took place.

At Ipene, the representative of the community, Dr. Ogban Ogban averred that the problem stared when the Egbor community leased their oil palm plantation to a company known as African Stone works which led to the arrest and torture of five Egbor boys by the natives of Urugbam Erei with another attack happening on May 15, 2018.

“There was a repeat attack by these same group when an official car belonging to the company was burnt including drums of palm oil and other equipment worth millions of Naira,” Ogban said, adding that; “on June 12, 2018, these dissident blood mongers entered into Egbor village and shot dead a boy by name Iyam Onugh.”

He accused the Urugbam natives of collaborating with Ugwelu Ekoli Edda community in Ebonyi state to invade Egbor Erei on July 4, 2018 which led to the killing of two persons as well as the destruction of properties including a caterpillar belonging to the company.

Furthermore, he said the invaded Ipene Erei where the walls of a police station under construction was pulled down and many houses destroyed while one Gabriel Unor was shot dead. These, he said, led o the displacement of the Egbor people.

He called on Mr. Esu to look into the establishment of a military post in Erei to forestall any breakdown of law and order; the disarming, arrest and persecution of those involved as well as assisting the internally displaced communities.

At Abanwan community, the secretary of the elders council, Mr. Godfrey Ogban Uwen who gave a synopsis of the war on behalf of the community accused the Urugbam community of breaking a decades old bond on land tenure which sees no physical boundary between the Abanwan and Urugbam community.

He said that “Our land is communally owned. There is no place called Abanwan and Urugbam boundary. We farm together and you hardly separate Urugbam farm from Abanwan farm. During land allocation, the land title holders of both communities would meet with one mud fish stick and a pot of palm wine respectively to appease the gods of our land.

“Having done that, each community decides where to farm for that year. But, today Urugbam no longer respect this tradition to the extent of attaching monetary value to the process of land acquisition for farming, but that does not bother us, we still align to our ancient bond.”

He claimed that despite one Bishop Frank Ngwu Owali brutally daggering a politician, Alex Ikor Ukam in 1992, they joined Urugbam in fighting of Okon Ohafia community in 1998 but were betrayed after Urugbam community allegedly entered a peace deal with Okon Ohafia behind their backs.

Also, he claimed that on July 24, 2015 an Abanwan native; Eruba Edadi Ukam was murdered by a native of Urugbam, Ikoso Smart at Onitsha while chemical substances suspected to be gammalin has been used to poison their water source.

On the recent crisis, Mr. Uwen claimed that one Francis Ilem from Urugbam had decided to excavate sand from the stream where they source their drinking water on March7, 2018 and despite warnings by the community, Ilem returned with about 15 boys on March 27 and when he was accosted, a squabble ensued and he was injured. This led to the Urugbam community blocking the only access road to Abanwan and attacking Abanwan natives which continued for a few days.

“It is glaring to hear that some of these attacks occurred a few days later precisely on the next market day when our people had no idea that they were going to do more. All those who went to market were attacked including our peace delegation. The commissioner of police was notified of this development. Arising from the above development, they threatened that the next farming season will be hell for us that all the parcels of land we owed and farm together would be confiscated and any little pressure to resist would be bloody,” Uwen said.

Uwen who claimed that the Urugbam community was found culpable and refused to pay the fines imposed on them, called for the arrest of Mr. Frank Owali, completion of the construction of the Abanwan – Ikun road; a stern warning issued to Urugbam to desist from blocking government road as well as allowing Egbor’s land for them and the completion of the demarcation exercise of the boundary between Abanwan and Urugbam.

But, the Urugbam community denies all these allegations and accuses the Erei community elites of attempting to give them a bad name and push them to extinction.

The paramount chief of Urugbam, Onun Odumusor Onugh who was represented by Mr. Owali said that: “The entire Urugbam community hereby wish to state with vehemence without equivocation, debunk in its entirety the fake news and hate speech credited to the people of Urugbam community which have beclouded the airwaves of the entire Cross River State and beyond.

“We state further that either any son or daughter or the entire Urugbam community have directly conspired and or betrayed any Erei community to our Ibos neighbors as alleged. We wish to put it on record that if anyone with proof of this should come forward with such facts.”

He alleged that the problem began in 1962 with the donation of six parcels of land totaling 3.910.3 acres of land to the farm settlement scheme of the Michael Okpara led eastern regional government. He said the Egbor and Ikun communities came into the Erei farm settlement under the second phase of the program.

Owali claimed that there was no known boundary between Abanwan and Urugbam with the Abanwan people always seeking for farmland from them, a situation which he alleged has since stopped and threatened that his community will protect its boundary lines.

“Urugbam and Abanwan are one entity and borders with Afono, Ikun and Agwagune respectively. Traditions and custom demands that Abawan people should always seek yearly farmland from Urugbam with royalties attached. We lately observed that this custom have not been complied with again by Abanwan people. After waiting for this much, henceforth Urugbam community will invoke this long existing customs that was put in place by our founding fathers to the fullest and we will protect or boundary lines,” he said.

On the recent crisis, he accused the Egbor community of sending a verbal message to them on March 18, 2018 that they have leased the palm plantation to African Stone Works and the management of the company was asked to stay action on the land in two meetings on March 20 and 24 at Urugbam and Enugu respectively as well another on June 9, 2018 at Ipene which the company has refused to: this, he said escalated the crisis.

Furthermore, he alleged that there was an attempt on his life by youths of Abnawan, Ipene and Egbor on July 2, 2018 and on July 3rd, they abducted ne Sabastine Inyang, a native of Urugbam and a search party discovered him in a pool of his own blood on July 4, 2018 which forced the Urugbam youths to lead a delegation to Egbor where they allegedly began “shooting at the youths of Urugbam and as they were escaping through Ipene axis, they met with another shooting from Ipene axis against them.”

Mr. Frank who said that the Urugbam youths returned fire in self-defense, called on the boundary commission to complete the demarcation of boundary lines; the company to stay action and the constitution of an “unbiased and independent panel of enquiries to look into the remote and immediate causes of the crisis in Erei.”

Mr. Esu was accompanied by several dignitaries including the paramount ruler, Onun Nicholas Odu, the Head of Local Government Affairs, Mrs. Oma Ekefre, the commissioner for ICT, Ebirigor Aya, the lawmaker representing Biase in the House of Assembly, Ogbor Ogbor, a representative from the state emergency management agency, Mr. Andy Akpotu-Adeshi among others.

And, Mrs. Ekefre in her remarks, commended Mr. Esu for promptly intervening in what she described as the “persistent and debilitating communal conflicts in Erei,” adding that: “No sane human being will understand why brothers will pick up arms against one another. No sane being will understand why brothers will destroy his brother’s property, including their farmstead and put them in harm’s way.

She said the peace meeting was enlarged to accommodate more voices but a community which she failed to mention did not attend. However, she said the resolutions which include all parties staying away from the palm plantation were communicated to all parties involved and appealed to them to sheathe their swords.

“The people of Erei, I urge you to sheathe you swords. I am sure that there cannot be any meaningful development in this area if these conflicts continue. How do you contend with external aggression if there is any antagonism between your communities,” she said.

In a similar vein, Mr. Ogbor in his address said that the war meant Okpor Okpor Erei leaders have failed and posited that the “only way we can defeat this failure is to stop the carnage. Let us from the bottom of our hearts say enough is enough.”

He stressed that only the people of Erei can give themselves peace and wondered why an attack still occurred despite the peace meeting of June 9, 2018.