Justice Onnoghen was part of the dignitaries with President Buhari who laid the wreath as a sign of honour to the fallen heroes. 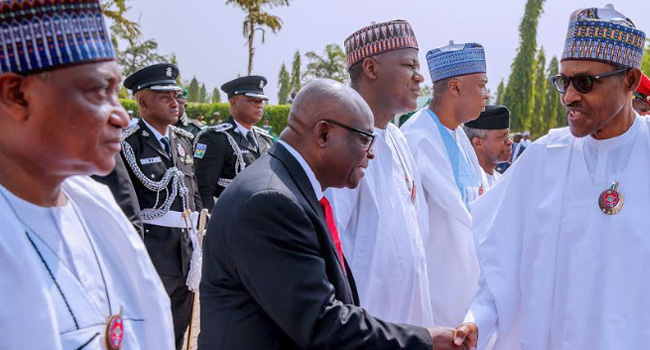 In a recent development, the Economic and Financial Crimes Commission (EFCC) has denied reports that its officials raided the residence of the Chief Justice of Nigeria, Justice Walter Onnoghen.The anti-graft agency condemned the claims in a statement on Tuesday, hours after reports emerged that EFCC operatives raided the CJN’s home.

“This is not only a figment of the imagination of the purveyor of the fake news but an evil machination by the creator and carriers of the news aimed at creating anarchy in the country,” it said.

The commission added, “For the record, the EFCC never went to the house of the CJN for arrest neither was an invitation extended to him.

“Several calls and short messages received all point to the fact that the brains behind the fake news had one thing in mind: to act as agents of destabilisation. We would not give in to their plots.”

The EFCC further condemned a viral video of the purported raid of Justice Onnoghen which it said never existed.

It slammed some individuals for allegedly sponsoring the reports, saying their actions cannot manipulate the people against the commission.

The anti-graft agency said it remains committed to fighting corruption in line with the mandate setting up the Commission.

It, however, vowed to sue the supposed sponsors of the reports for their actions.

“Purveyors of the evil news [should] be ready to defend their actions in the court of law as the EFCC will file a libel suit against them without further delay.”

How can I say this to sink in right away? “I amnot doing again, I want to sign the