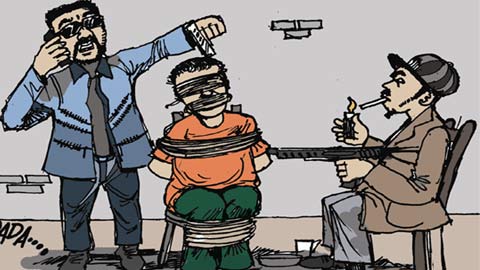 By  Judex Okoro, The Sun Newspaper

Tension and fear have gripped residents of Calabar, the capital of Cross River State, as kidnappers seem to have invaded the metropolis, following the abduction of an undergraduate of Arthur Jarvis University and nine others in the last three weeks.

This is happening even as Operation Akpakwu, the state’s security outfit is said to be patrolling major streets of the metropolis. Governor Ben Ayade inaugurated Operation Akpakwu in December 2020, following the public outcry against kidnapping, robbery, and cult clashes, which threatened peace and economic activities in the state.

The inauguration of Operation Akpakwu brought some relief and tranquility, as the security agents went to work, carrying out surveillance, combing flashpoints, creeks, and villages, fishing out criminals, suspected kidnappers, and their collaborators. The operations of Akpakwu reduced the spate of kidnapping and cult clashes tremendously for a long while, just as nightlife and other social activities gradually returned to the metropolis.

However, the last few weeks have witnessed an upsurge in kidnapping, as hoodlums stormed the waterways, a school, and some neighborhoods and highways and whisked away innocent persons, and allegedly collected ransom from victims, ranging from N200,000 to N5 million.

Daily Sun discovered that they have also been operating in some residential areas at 8-Miles, Ikot Ishie, Uwanse, and Mbukpa axis and carted away household items and personal belongings worth thousands of naira.

Sources close to security operatives disclosed that one man popularly known as Tunde was kidnapped three weeks ago along Lemmna Road at noon while on his way to Akamkpa, where he lived. It was learned that the kidnappers demanded N5 million.

Security sources further revealed that, two weeks ago, gunmen abducted the presiding pastor of HeavensGate Church, located at Goodluck Jonathan By-pass. The pastor was trailed and kidnapped at Idundun, where he went to show somebody a piece of land he wanted to sell.

Family sources said the pastor was yet to be released at the time of this report.

Within the same week, five male passengers traveling to Oron, Akwa Ibom, in a boat for burial were kidnapped while the ladies on board were robbed and abandoned in a nearby creek. However, the victims have been rescued by security operatives.

Not relenting in their dastardly acts, gun-toting men invaded Arthur Jarvis University, Akpabuyo, on July 19, 2022, at about 9 pm, and abducted one female student and injured others. The kidnappers asked for N2 million. The student has been rescued.

And in another daring move, eight gunmen raided Bateba Street, by Mayne Avenue extension, in Calabar Municipality, and whisked away Mr. Christopher Aligwe from his warehouse on July 28, 2022. Aligwe, a business tycoon, hailed from Nnewe in Enugu State and was a leading distributor of confectioneries in Calabar.

Daily Sun learned that the gunmen stormed the victim’s warehouse at about 10.30 am that fateful day, cordoned off the compound, and surveyed the place for some minutes before they struck.

A witness who gave his name as Akpan said the hoodlums wore black, caps and masks, and drove in in a tinted Sienna minivan. He added that, before their arrival, a teenager, at least 17 years old, suspected to be a spy, was seen moving around the premises pretending to be picking scraps of metal. He later went straight to the victim on sighting the gunmen and pointed at the man.

On pointing at Aligwe, three of the gunmen surrounded him and forced him into the waiting car, while they shot in the air to scare away neighbors who attempted to interfere. And in a commando style, the hoodlums zoomed off with the victim and the boy spy. Family sources revealed that the abductors have called and demanded N50m.

Another kidnap gang struck Satellite Town on the night of July 30, 2022, and abducted a lecturer at the Institute of Public Policy and Administration, University of Calabar, Mr. E. Eteng, from his residence.

The UNICAL information officer, Eyo Offiong, who said the incident happened about 9 pm, prayed for the quick release of the lecturer.

A witness and student of Arthur Jarvis University, who simply gave his name as Ebong, said they were coming from their night reading class when gunmen accosted and abducted one while others who ran for their life sustained injuries.

Ebong said: “It is very unfortunate, as the school has never witnessed this ugly incident before. It just happened like a flash and they whisked away one of us. We are happy that our colleague came back safely. We call on the management to beef up security.”

Mrs. Eno Akan, one of Aligwe’s neighbors on Bateba Street, said: “Mr. Aligwe was shot late last year by gunmen at the same warehouse, but he managed and escaped with the gunshot wound. Since then, he has been trying to be vigilant, until they struck again and got him.

“We are alarmed at the rate of crime in this area in recent times. We don’t sleep anymore at night. These bad boys are back. When Operation Akpakwu came on board in 2020, we had some relative peace, but from what is happening, they have relented. Insecurity is back in Calabar. We urge Governor Ayade to do something about it.”

Expressing worry at the turn of events in Calabar in the last three weeks, a resident of Satellite Town, Emmanuel Agba, said: “We are now living in total fear as we now retire to our houses and keep praying to God to protect us. Nobody in Calabar is safe. We had thought Operation Akpakwu had whipped these miscreants out of existence. Security officers should wake up and we are ready to cooperate.”

Speaking earlier on the incident, the founder and chancellor of Arthur Jarvis University, Sir Arthur Jarvis Archibong, described the news making the rounds that the institution had been shut indefinitely as false, explaining that some of the students had already rounded off exams but were waiting for the submission of projects and other activities and would resume in October.

He said: “We want to assure every parent and ward that the safety of their children, our students, is key, as we take the wellbeing and welfare of every student seriously and, apart from the discrete measures we have taken to forestall further occurrence of such security breach, we guarantee that nothing of such will ever happen again.”

Worried by the increasing spate of kidnapping, the traditional rulers in Akpabuyo and Bakassi local government areas, where Arthur Jarvis University is located, have resolved to revert to the old traditional methods of curbing crime.

Warning criminals to steer clear of the communities, after a meeting with clan heads and the management of the varsity, chairman of the Cross River Traditional Rulers’ Council, Etiyin Etim Okon Edet, stated that their forebears who did not go to school were able to govern their kingdoms with zero crime rates, such that foodstuffs were left in the market and not stolen.

Edet said: “We would work to revert to the old system, hence the need for all to purge themselves. Any traditional ruler who is involved, or the children are involved in any crime or criminality, from now henceforth, the person knows what is going to befall him.