ESKOR @70: A Toast To Asuquo Ekpenyong OON By VICTOR NDOMA-EGBA 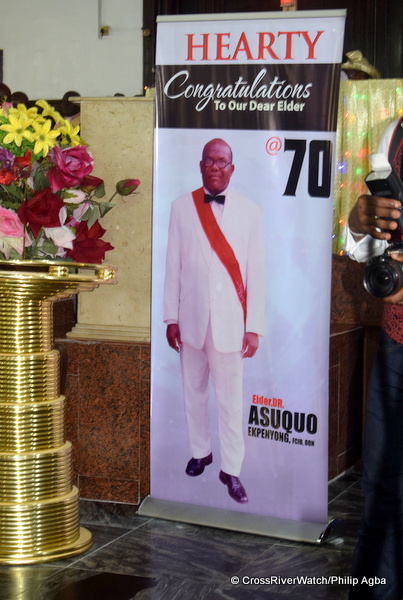 When I relocated my law practice from Ogoja to Calabar in the early 1980,s, then I was with the enigmatic Kanu Agabi,now Senator, Senior Advocate of Nigeria, former Attorney General of the Federation and Minister for Justice, ex this ex that, Calabar was long established as a City of history, learning and culture, given its early contact with European traders and missionaries and therefore western education and influences.

The city had a surfeit of professionals with national,and in many more cases, international, recognition. In medicine we had Doctors B. J. Ikpeme, Sama Ekpo Sama, James Ene Henshaw who became better known as a playwright, Simon Okpokam, Emmanuel Nya etc. In law we had Chief E.E.E. Anwan, Nigeria,s longest practicing lawyer, the famous Dr.Okoi Arikpo SAN, Chief Efiom Ekong SAN, the mentor of Walter Samuel Nkanu Onnoghen, by the grace of God ,Chief Justice of Nigeria today, Chief Orok Ironbar, the then upcoming Akpan Ekong Bassey who was to become the third Senior Advocate of Nigeria out of Calabar.

In surveying we had the doyen Chief Dien Aniyom and surveyor John who practiced more out of Aba. In engineering we had Fabian Mgba who had built the famous Ojukwu bunker, E.A.Lawrence, A.B. Martin, Grace Nyambi, Asuquo Works Et al. In banking we had Chiefs J.L. E.Duke, Eyamba Idem, O.N.Ojiji etc.

In architecture we had Chief Oku and Maurice Archibong whose imprimatur is in most Catholic Churches in Nigeria of the time, in quantity surveying Senator Victoŕ Akan.

In the public service we had Chief Francis Archibong aka Ete Frank, E.E. Monjok,Wilfred Inah, Gabriel Ogar,Michael Monn, the Nyambi twins, Dan and Joe, in the media Okokon Ndem, yes the same old Okokon Ndem, Victoŕ Effiom, and though relatively young Ray Ekpu, Bassey Ekpo Bassey and Kate Okon, among others, who had already earned national and international reputations as journalists.

The young University of Calabar had through academics like Lindsay Barret, Gloria Hart, professors Kalu Uka and Emenyonu established herself as a leader in literary and dramatic arts attracting some of the biggest conferences, academics and practitioners to the City of Hope Waddell, West African Peoples Institute, the first privately owned secondary school in Nigeria, the city to host the first soccer match and printing press in Nigeria, the City of Orok Oyo and Mary Slessor with a great culinary and sartorial reputation, the city of many firsts.

I leave the story of Calabar to historians who are better equipped to tell her story.

Soon after the Nigerian Civil War there was an “ invasion “ of Calabar by the first set of post war University graduates who were seeking careers in the hungry public service of the then South Eastern State and later Cross River State, and largely Mercantile Bank, established by the youthful forward looking Military Governor of the State, U.J. Esuene and nursed to stability by Terence Vince and Ernest Ukochio.

Another wave of “ invasion “ was in the early 1980’s when newly qualified professionals moved into the city to take advantage of emerging opportunities and to stamp their young confident steps on their professions. They modernized their offices and had a bolder and wider view of their professions.

This wave saw people like me, Paul Erokoro,Assam Assam Imoh Inyang etc, in the legal profession, Joe Urua in estate management, Akankpo Aniyom in surveying, Clement Ebri, who though part of the earlier wave burst forth in journalism.

There were many more. At the same time Senior boys like Asuquo Ekpenyong migrated from Central Bank of Nigeria to Mercantile Bank.

This second wave brought with it new urgency, new energy and a new network that was to define the new social and professional landscape of the city.

While new friendships were struck amongst the new arrivals and old friendships consolidated, the veterans also took these new young Turks under their wings. That was how I became the subject of the paternal attentions of Dr. Okoi Arikpo.

Soon after my relocation to Calabar I was surprisingly appointed Commissioner for Woks and Transport at a rather unusual age of 27 years.

Cross River and Akwa Ibom States were still one, there were only seven ministries, no Special Advisers or Special Assistants.

Commissioners supported by their Permanent Secretaries ran their respective ministries. I needed help in my new assignment. One of those I turned to was Chief J.L.E. Duke, who was now Managing Director of Mercantile Bank.

I became a regular in his office and I became a member of his bank family which included Chief Asuquo Ekpenyong, Gershom Henshaw, Anne Etta amongst others. A friendship that was to endure to this day ensued.

I got to know Chief Ekpenyong through Chief Duke but the relationship immediately took its independent trajectory. You were in your early thirties but you literally already had the world at your feet, a solid education, promising career, a family, an an engaging and confident persona.

Chief Duke’s tenure was turbulent, more of politically induced turbulence that saw his early contentious exit from the bank in spite of the tremendous work he was doing in the bank. His “boys“ were also affected. I was humbled when they chose me as counsel.

By this time I had left government. Gershom Henshaw opted for the private sector and became part of the milieu’s definition. Chief Ekpenyong also took that path and today has redefined the firmament.

One attribute of Chief Ekpenyong is his faith in God, in his people and himself. Soon after his exit from Mercantile Bank, he was appointed Deputy Managing Director of a major national bank with a clear indication when he would assume the substantive position.

He came to discuss the matter with me and I was shocked when he told me he was turning down the offer. He said he wanted to do his own things. This he has done successfully amongst his people.

Inspite of the challenges he pushes on. Today I believe he is the only Cross Riverian who can boast of a home based, home grown conglomerate.

From banking, to financial services, insurance, hospitality and now to tertiary education and he is still pushing. In politics he is kingmaker, at least in their party. He is a community and church leader. He has remained a driver of his Eniang and larger Calabar communities self development efforts.

He is an active Elder of the Presbyterian Church and takes matters of his faith religiously.

Chief Ekpenyong has an uncanny ability of recognizing opportunities, whether business or political, and seizing them. He recognized the deficit of indigenous participation in his niche in our local economy and seized it, he recognized the absence of professional partnerships with government, he motivated the creation of the needed synergy in this regard and seized the resultant opportunity.

He recognizes abilities and talents and taps into them. He is focused and pursues his goals with single minded determination and vigor.

He is a successful family man who encouraged his wife to rise to the top while raising her family. She earned a Ph.D and became Registrar of Cross River State University of Technology. A man’s true success is measured by the success of his wife. Going by this measure, Chief Ekpenyong is successful.

His children are success stories in their own right. He has been their guiding hand and support. You are indeed blessed. As you turn three scores and ten, we pray you many more years in good health, peace and contentment.

Like all mortals you have your foibles and shortcomings. Who is human who does not have failings? You do of course. These failings confirm that in spite of your remarkable accomplishments, you are human after all.

Your life is a testimony that failing or succeeding in life is a personal choice; a choice we must make irrespective of our circumstances or environment, anything else is an excuse.

To our youths, you do not remain a youth forever. Make choices not excuses, for like the once young Asuquo Ekpenyong, you will some day become old and will then have to live with the consequences of the choices you made, to succeed, to fail or to make excuses.

Life is after all the sum total of the choices you made. Elder, Chief, Dr., Asuquo Ekpenyong OON, you chose well when you had to, now you have earned the right to enjoy.

Congratulations. Enjoy. I thank God that I met your story, even if it was midway. Yours is indeed a story which should be told.

Senator Victor Ndoma-Egba OFR CON SAN, Chairman, Governing Board of NDDC and Leader of the 7th Senate writes from Abuja.

This message in the video from Governor Ayade resonates with me very loudly. It echoes my thoughts and repeats