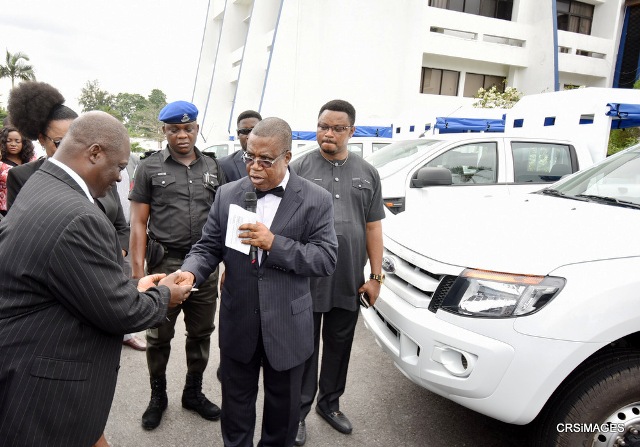 As part of efforts to ensure speedy dispensation of justice, the Cross River State government, has presented seven pick-up vans to Special courts established in the state.

The courts are Revenue, Forestry, Environmental and Sanitation, Traffic, Arbitration and Miscellaneous Matters, Medical and Pharmaceutical, as well as Ports and Allied matters.

Presenting the vehicles at the Governor’s office, Calabar, Governor Ben Ayade, who was represented by his Deputy, Prof Ivara Esu, maintained that “government wants the rule of law to be the order of the day while ensuring that the dispensation of justice is also done speedily.”

Ayade reiterated the readiness of his administration to support the courts in the discharge of their duties, pointing out that the courts will be mobile in nature.

According to the governor, the Special Courts will ensure that the issue of evading taxes and levies are adequately addressed.

His words: “The courts will ensure that everybody does what he needs to do, they won’t take you to the normal courts where they will be adjourning and adjourning. These courts will meet and decide and the punishment meted.”

Receiving the keys, chairman of the special courts, Justice Maurice Eneji, thanked the governor for the provision of the vehicles which he said, will aid the courts in administering summary trial while helping government to generate revenue for the state.

Eneji said: “The idea is to assist government generate revenue as we will go after those who have refused to pay tariffs, taxes and all forms of levies due to both the state and local governments.”

He added that “these courts will move from bakeries to schools, to hospitals, forestry, private clinics, market square and timber markets to ensure that those who are supposed to pay one form of tax or the other to government do so.”

High point of the event was a test-drive of one of the vehicles by the Chairman of the Special Courts.