The European Union Election Observation Mission (EU EOM) has raised concern with the suspension of Justice Walter Onnoghen as the Chief Justice of Nigeria.

In a statement on Saturday, the mission questioned the process and timing of the suspension of Justice Onnoghen by President Muhammadu Buhari.

It noted that the Independent National Electoral Commission (INEC) had invited the European Union to observe the forthcoming general elections.

The EOM stressed that with less than three weeks to the polls, there was a need for political parties and their candidates, as well as the electorate to be confident of the independence of the judiciary.

It wondered why Justice Onnoghen was suspended at a time so close to the swearing-in of justices for Electoral Tribunals and the hearing of election-related cases.

The mission, therefore, called on all parties to follow the processes provided for in the Constitution and to respond calmly to any issue raised.

The statement comes a day after President Buhari appointed and swore in Justice Tanko Mohammed as acting CJN.

Read the full statement from the EU EOM below; 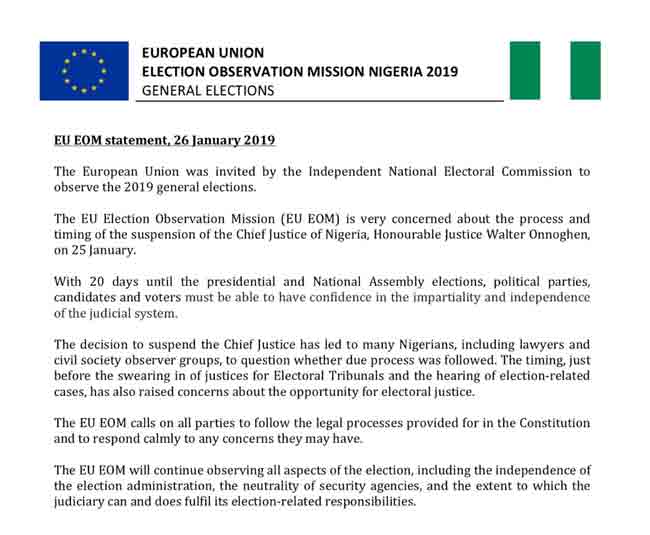 The European Union was invited by the Independent National Electoral Commission to observe the 2019 general elections.

The EU Election Observation Mission (EU EOM) is very concerned about the process and timing of the suspension of the Chief Justice of Nigeria, Honourable Justice Walter Onnoghen, on 25 January.

With 20 days until the presidential and National Assembly elections, political parties, candidates and voters must be able to have confidence in the impartiality and independence of the judicial system.

The decision to suspend the Chief Justice has led to many Nigerians, including lawyers and civil society observer groups, to question whether due process was followed.

The timing, just before the swearing in of justices for Electoral Tribunals and the hearing of election-related cases, has also raised concerns about the opportunity for electoral justice.

The EU EOM calls on all parties to follow the legal processes provided for in the Constitution and to respond calmly to any concerns they may have.

The EU EOM will continue observing all aspects of the election, including the independence of the election administration, the neutrality of security agencies, and the extent to which the judiciary can and does fulfil its election-related responsibilities.