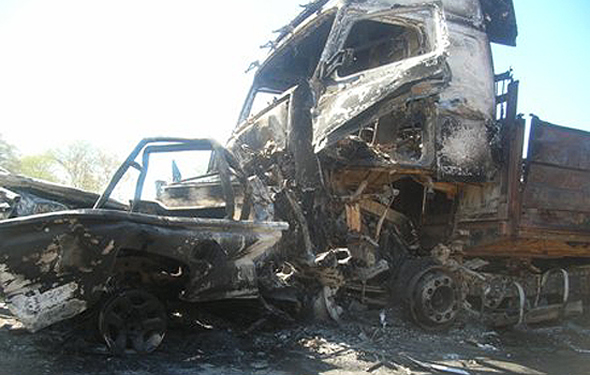 It was a gory spectacle on Friday evening at Ehom Village, Akamkpa along the Calabar –Ikom highway when a trailer traveling to Calabar crushed five members of the same family, three females and two males while on their way to Ikom in the central district of the state.

The empty trailer, an eye witness said, was heading to Calabar on top speed obviously to convey goods while the family traveling in a Toyota Camry to Ikom suddenly came head – on with the trailer when the Camry was overtaking another vehicle on a bend had left its lane and could not return quickly enough before it was run over by the speeding truck.

The car which was driven by Chief Osim, the elder brother to Fred Osim, Special Adviser to Senator Liyel Imoke on Political Affairs also had his younger brother, his mother, a niece and youngest sister, Delight Osim whom the family was leading to Ikom to distribute her wedding cards for the wedding scheduled for 11th of May, 20013.

“She is the last born (youngest sister) to Fred Osim and she was the one the brother and mother were taking to Ikom to distribute her wedding cards for the wedding scheduled for the 11th of May-we are lost for words”. John, a family source said.

The trailer driver and his assistant allegedly ran to the bush to escape the rage of the youths of the community and have since not been found but rescue efforts by men of the Federal Safety Commission led by the Itigidi Unit Commander Mr. B. I. Abdul cleared the way and deposited the five corpses at the Ugep General Hospital mortuary.

Mr. Osim, who a source said is too grief stricken to speak could not be reached on phone but the Commander Federal Road Safety Commission in Calabar, Mr Yusuf Salami said dangerous overtaking was responsible for the Road mishap. “The accident was caused by reckless overtaking.

“If someone wants to overtake, he should do so when the road is clear but if he overtakes at a blind bend without seeing oncoming vehicle, then, he is likely to run into avoidable accident – that accident was avoidable”.