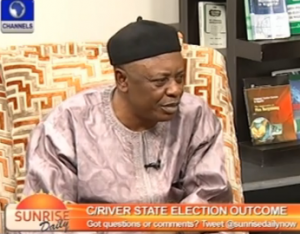 The Chairman of the Cross River Independent State Electoral Commission (CROISEC), Patrick Otu, has denied allegations that he called APC chieftain, Obono Obla, to say that the PDP led state government was pressuring him to bar the APC from contesting.

Following protests by the All progressives Congress (APC) that the recently concluded local council election in Rivers State was ‘a sham’ and ‘mere charade’, Mr Otu has replied stating that people will always debate and argue about elections when they come.

“Merger of parties is a novelty in our political system and so no law contemplates the merger of parties” he said adding that CROSIEC does not register parties.

Speaking about APC’s inability to contest in the elections, Otu stated that shortly after APC was registered, INEC “referred us to the electoral act, section 84(6), which states that a newly registered party shall only participate in elections after 90 days”.

CROSIEC did not make the electoral act, he said, adding that “we cannot keep a party out of elections”.

On shifting the date of election, in order to allow the APC participate, the CROSIEC boss said the commission can only shift elections “when there is an imminent breakdown of law and order”.

He also said only the State Assembly as well as the Chief Executive of the State can raise the issue of shifting elections. “That is what the law states,” he said.

Responding to allegations made by Agba Jalingo, who had observed the election process, Mr Otu denied calling APC chieftain, Obla, informing him of the pressure mounted on him by the PDP, to ensure that APC was unable to contest in the elections.

However, he admitted that the APC had applied for an extension of the election date, stating that “APC did not write to us to extend, referring to any law

Their letter was an appeal”.

He disclosed that NCP, PPA, APGA participated in the election.