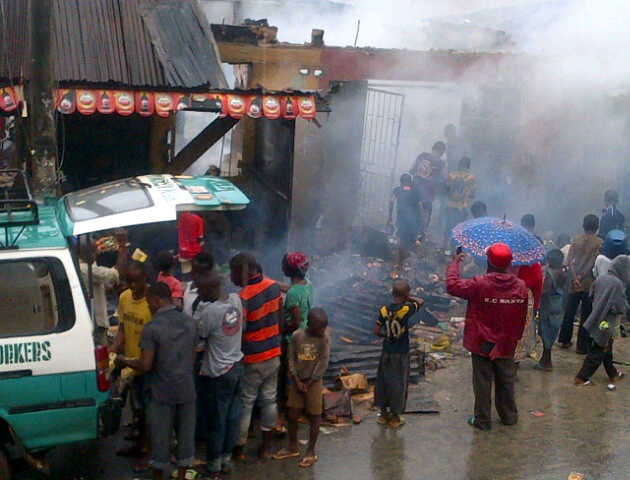 Stranded residents of No. 27 Mission Road in Ogoja this morning told CrossRiverWatch that but for the grace of God and the efforts of neighbors who came to their rescue, their entire street may have been consumed by an inferno which engulfed a block of shops razing everything including one of the biggest wholesale provision stores in Ogoja, Gasko Supermarket. No life was however lost in the inferno.

The fire disaster which eyewitness said started at 12 midnight and lasted for over six hours into this morning escalated to other shops and nearby residential buildings due to help that was not forthcoming.

Residents told CrossRiverWatch that when they contacted the Fire Service Department in Ogoja they were told that the only fire emergency truck in the station has been bad for the past ten years.

One of the residents of the burnt building Madam Rosemary Okafor said “I was asleep when I had some noise. Initially I thought it was armed robbers but later discovered it was fire spreading through the roof then me and my family ran to safety”.

When asked what the course of the fire is, she like other eye witnesses and tenants of the burnt building said the source of the fire was more mysterious than normal.

Another eye witness who was around when the fire started was still in disbelieve and displeasure at the failure of the fire service to put off the fire that lasted for more than 6 hours.

When CrossRiverWatch visited the scene, even other security agencies like the Police, Road Safety Marshalls and Civil Defence where nowhere near the scene as some persons under the guise of rendering help took the opportunity to loot.
Residents of the affected building were all confused and panicking as there is no present assurance of where to put their head.

The fire is said to be one of the biggest fire disaster in Ogoja in recent time.