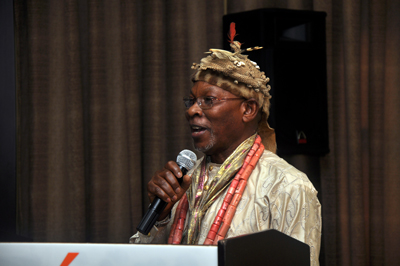 His Highness, Muri Effiong Mbukpa, the Muri Munene of Efut nation has said that the National Conference has come at the right time and would help the ethnic nationalities that make up Nigeria to define their terms of existence as one country.

Muri Effiong Mbukpa who spoke with CrossRiverWatch in his palace in Calabar South said Nigeria in its present state is a marriage of convenience strung together by colonial masters but the National Conference would allow the different ethnic groups in the country to come together and dialogue and agree on the way forward.

“I believe it is better for us to remain as one country but let the different ethnic groupings in the country come together in this Conference and agree on the terms of existence if we have to remain one”. He said.

He stated that there is so much discontent in different parts of the country and it is only when “we all come together and address the issues affecting each and every part of this nation that we can reach a common ground and continue from there if we need to remain as one nation and one people”.

According to the monarch, the Aburi Accord signed by General Yakubu Gowon and Dim Emeka Ojukwu spelt out government in which power would be devolved to the federating units not as it is presently obtained where power is concentrated at the center.

“Look at our roads, the airports and other infrastructure which are maintained from the center, a vast majority of those are in a mess because nobody seems to be in charge or can be held accountable but if these were in the care of the states, we know who to hold liable”.

On 2015, the traditional ruler asserted that in a democracy, power lies with the electorate which can elect or reject any leader so the ongoing crisis in the country as to whether President Goodluck Jonathan should contest in 2015 is unnecessary as the people would decide his fate come 2015.