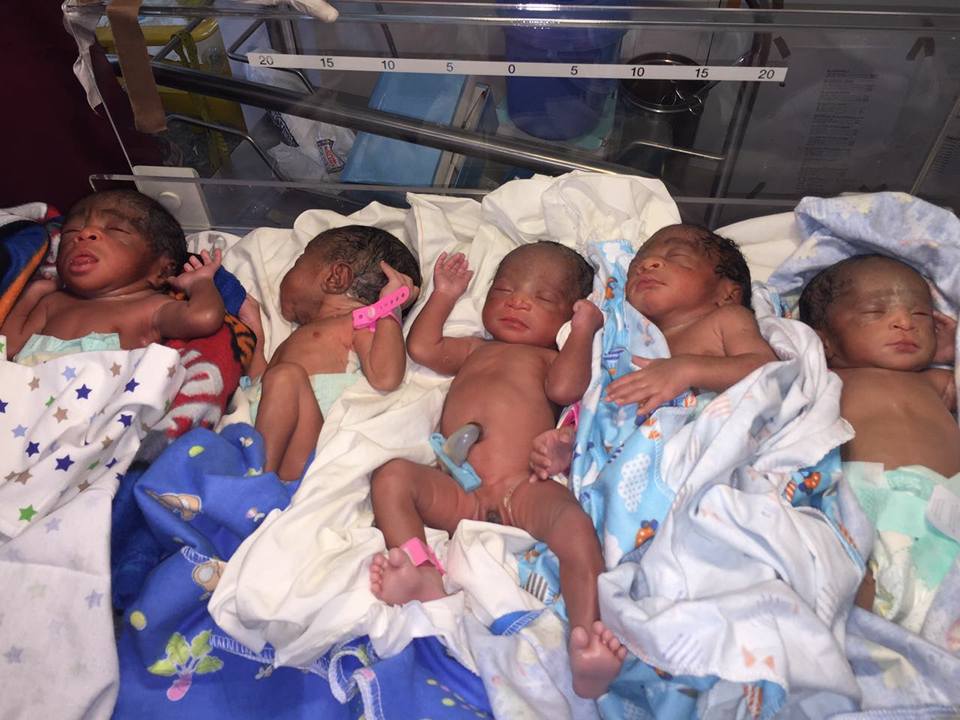 The Cross River Government yesterday said the first quintuplets in the state’s history were delivered Monday in Calabar to a couple who have been childless after 10 years of marriage.

Dr. Linda Ayade, the Wife of the Governor, shelved a scheduled journey to rush down and join the Commissioner of Health, Dr. Inyang Asibong and the DG of the Primary Health Care Development Agency, Dr. Betta Edu, who had earlier arrived the University of Calabar Teaching Hospital, UCTH to witness what the hospital management says is the first of it’s kind in the facility.

The visibly stunned first lady, who is also a medical doctor, revealed that she has only heard and read about how quintuplets have been delivered but has never witnessed it before. She extended the sincere congratulations of the first family to the parents of the babies and assured them that they will not abandon the babies.

Dr. Linda in her remarks, characteristically waxed religious saying “five is a divine number for Jesus, Grace, Mercy. 9th January is the number of completion on the first month of the year. This event is a sign from God that this is our year of abundance. On the first day of the year, it was twins, today it’s quintuplets, am over joyed.” she exclaimed.

She donated One million naira to the family of the quintuplets with an incubator for the management of the new babies. She also donated additional five hundred thousand naira to the medical team that delivered the babies as well as an undisclosed amount to a set of twins in the ward who were delivered on January 1.

Earlier, the state Commissioner for Health Dr. Inyang Asibong congratulated the parents of the new babies and assured them that the government will give a helping hand to support the family.

“I want to on behalf of the government and the people of the state congratulate the parents of the babies as well as the entire team led by Professor Iklaki that delivered this babies. I know it must have been a difficult job and thank God the babies all came out safe and the mum is also safe. If the situation were different, I would have advocated exclusive breastfeeding, but in this case, I know it will be impossible to insist on that. But the government will definitely support the family in the upbringing of the children.” she said.

The Director General of the Primary Health Care Agency, Dr. Betta Edu, described the birth of the children as a miracle and urged the parents to now opt for family planning.

She encouraged women to emulate Mrs. Edet, the mother of the babies, who went for her antenatal and delivered in a health facility with a skilled birth attendant, saying it as the solution to maternal mortality.

“This is the first of its kind in this hospital and in our state. This is a divine miracle and there is great joy in our hearts. God has done a wonderful thing and we will now advice the parents to take up any of the family planning methods available to make sure they control further birth. There is no need bringing forth further children that we may not have the resources to cater for so as a government, we will do everything to support the family through the care of this children while we also advice them to consider taking up any family planning option.”

Father of the children who is also a doctor at UCTH, Dr. Ekpo Edet, could not hide his joy and fears while speaking to journalists.

He said waiting for ten years to have a child was a grueling period and the arrival of the quintuplets after a decade is a victory for God and his family.

He also expressed his fears about the cost of bringing the children up in the a recession and called on government and individuals to assist him at this critical time.

He said, “God is never late. I have waited on for 10years for this children. We realized that God was going to bless us with something special when my wife had a scan after some months of the pregnancy.

“At that point, we knew she was carrying more than one baby in her womb. So I am very happy at the successful delivery of this children and I give thanks to God that the babies and the mother are very well and safe. I call on the government and the good people of Cross River state to come and assist us to see how we can bring these children up. The country is presently going through recession everyone will agree so we will need everyone’s support to complete this joy that God has given us.” he appealed.

The news of the delivery which turned the hospital to a Mecca of sorts also had several other big names arriving the scene including the state Commissioner for Information, Rosemary Archibong, the Commissioner for Women Affairs, Stella Odey, General Manager Of the state owned media station CRBC, Theresa Essien among others. By SaharaReporters The Federal High Court in Calabar, Cross River State has dismissed a suit that sought to nullify