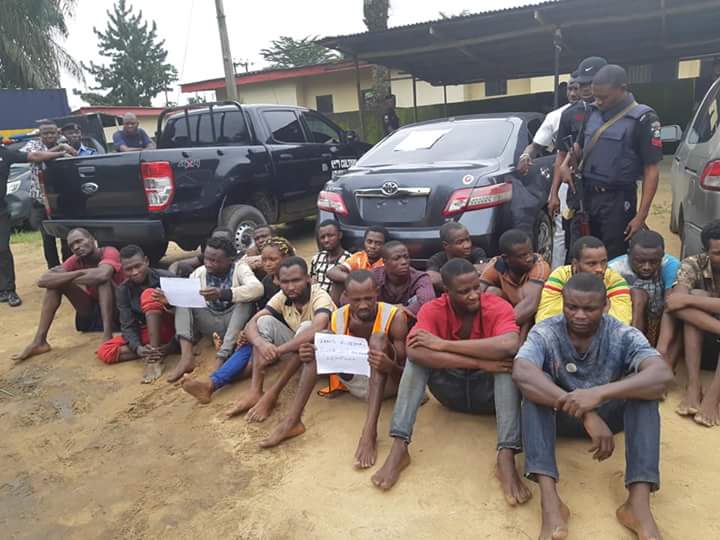 The police command in Cross River has arrested a couple for allegedly trafficking their two-year old first son to an agent in PortHarcourt in exchange for money.

The Commissioner of Police, Mr Hafiz Inuwa, who presented the suspects to journalists on Tuesday in Calabar, said the couple was arrested on July 23 in Calabar after a report by the mother of the child, Mrs Magdalene Bassey.

Inuwa explained that the mother of the child reported that her husband, Mr Daniel Bassey, gave out the child to a trafficking agent for an undisclosed amount of money.

“On July 23 2018, one Mrs Magdalene Bassey reported at Efut Divisional Headquarters in Calabar that her husband, Mr. Daniel Bassey, took their first son to an unknown person in PortHarcourt through one woman called `Mummy’.

“The police immediately swung into action and arrested the suspect. During interrogation; the suspect revealed that his wife was a party to the transaction.

“The duo are now in police custody to unravel the cause of this inhuman action and possible prosecution,” he said.

The father of the child told the News Agency of Nigeria (NAN) that he gave out the child as collateral for NGN180,000 to help him pay his house rent.

“There is no work in this rainy season and I am jobless. A guy from my area informed me that he knows a woman who lends money to people.

“That my friend told me that I can give out the child as collateral to get the money without necessarily selling him.

“The woman gave me N180,000 immediately after she received the child. After that, my mother in-law came and asked me of the child and I lied to her that I took the baby to my brother for holiday,” he said.

The commissioner also presented 37 suspected armed robbers; 20 suspected cultists; eight suspects for unlawful possession of firearms and five suspects for murder, among others. He assured that the command would continue to work in collaboration with other security agencies and residents of the state with a view to safeguarding lives and properties.

Meanwhile, in a related development, the Police command has commended residents at the Obudu Mountain Resort for turning in four suspected armed robbers who had attempted to rob a branch of the Guarantee Trust Bank on Sunday morning.

DailyPost Newspapers reports that the Police Public Relations Officer, DSP Irene Ugbo who confirmed the incident said, “The suspects are in our custody and the Ranch Youths did well. Instead of committing the Jungle Justice crime, the Ranch Youths handed them over to the Police which is the right thing to do.

“I am glad the people are beginning to know that it is unlawful to take the laws into their hands.”

The gang is said to have been led by one James Udofia, a graduate of the Cross River University of Technology native of Akwa Ibom State.

An eyewitness who told DailyPost his name is Matthew said the Udofia, also known as ‘Junior’ boys were beaten before been handed over to the police.