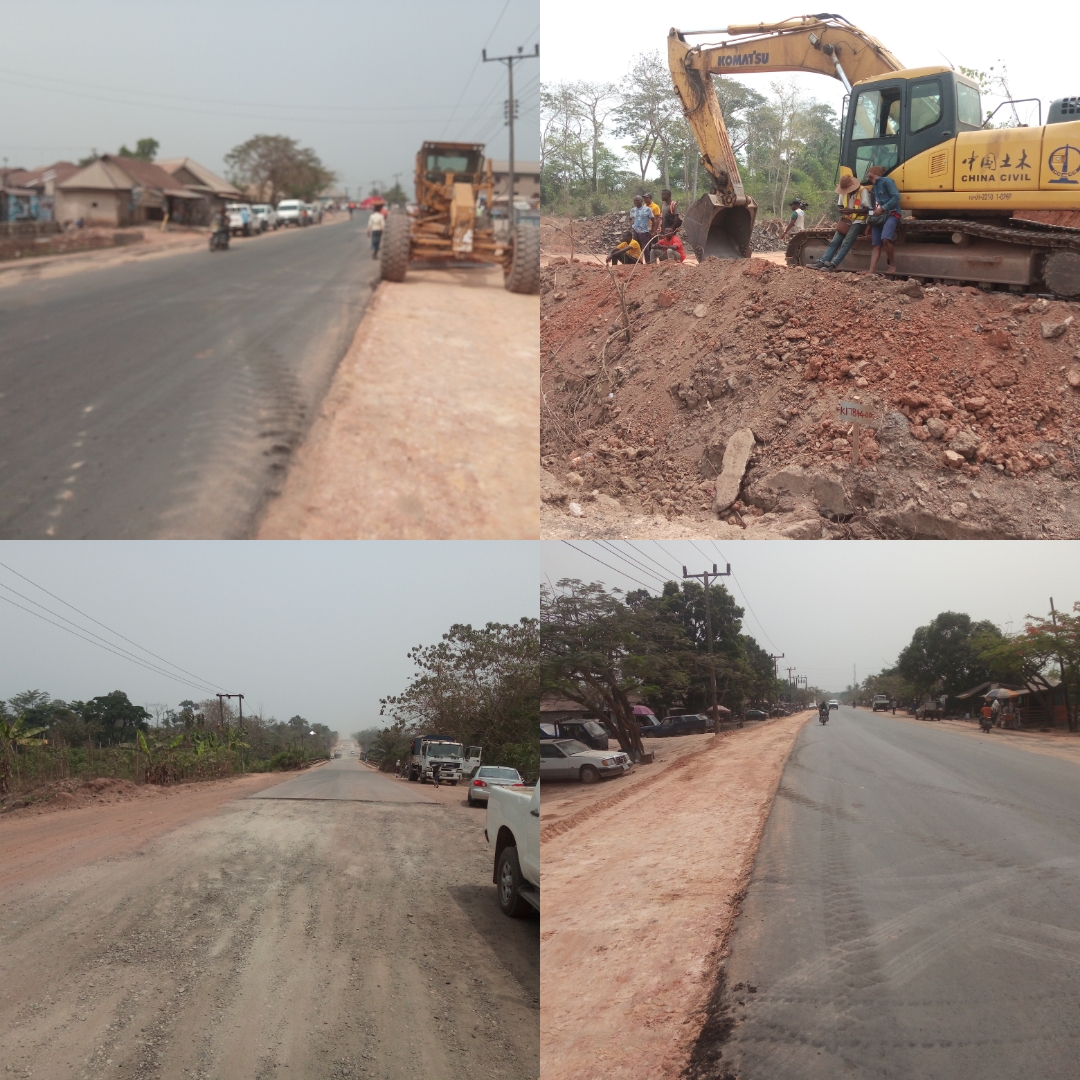 The Federal government has begun the construction of the new bridge in Ikom local government area of central Cross River with a view to preventing a possible collapse of the current one.

The State controller in the ministry of power, works and housing, Engineer Bassey Nsentip disclosed this to CrossRiverWatch on Thursday during an inspection tour of the section two of the Calabar – Ikom – Katsina-Ala highway which is currently under rehabilitation.

Nsentip who disclosed that a large chunk of the almost 330 kilometers of road is currently being rehabilitated averred that: “The existing bridge was built in the colonial time. We have had some issues with the bridge and it is obsolete now because the headroom does not allow articulated vehicles with high payload to pass because of that thrust system.”

Nsentip who said accidents have been recorded due to the fact that many drivers do not know that the headroom is low added that: “The piles have started showing signs of failure and that is why the federal government decided to build a new bridge to prevent possible catastrophe in the future.”

On the road rehabilitation, Nsentip averred that: “Where we are now is the second section from Ogoja where we have Abuochiche to Mbok junction and there is a contractor working there right now. From Mbok junction to Ikom four corners is in good service condition.

“From Ikom to Iyamoyong is the stretch handled by this contractor, the CCECC. It is about 50 kilometers. The contractor has been working and has covered about 71 percent of the road. They just scarified this stretch which will be followed up with earth works and pavement works.”

However, he said work will be put on hold till after the Presidential and National Assembly elections slated for February 16, 2019 due to the policy directive handed over to the contractor by his head office and lamented the improper usage as well as sabotage of road infrastructure by residents even as he called on Nigerians to desist from such acts.

“We will like to advise the public to make good use of these facilities. When government build roads, it helps develop our economy and improve our social lives. For example, between Iyamoyong and Ugep that we have finished, people are driving at max speed and we hear cases of accidents, so we advise that people should be conscious of the road signs and markings that we put there that will guide them on how to drive on federal highways.

“Another thing is the issue of abuse of federal highways. People just go and begin to cut across the road without taking permission. Maybe, they are building houses and they want to cross their water service pipes across the road or cables or whatever, they just go and begin to cut the road without taking permission. And when you do that, it (the road) is not properly protected. When rain comes, water gets in there and they begin to spoil again,” he said.

The project which CrossRiverWatch gathered, was awarded in 2009 is scheduled to be completed within 24 months.

And, the director of federal highways in charge of the South-South zone in the ministry, Engineer Godwin Eke, explained that the delay in the kick off of the project was due to bureaucratic processes among others.

He said that: “One, we have the issue of funding. Number two, we have the issue of the contractor accessing the place; what we call taking position in the right of way. In some areas you see these electric poles, they need to be relocated. The contractor cannot come and start working, you need to give him access to work and these things take time. You see buildings on the road, you have to demolish them and you have to compensate the owners, these things take time to package and pay.

“These are the issues and then you have the problem of inclement weather, you know last year we had very very bad weather. So, when you package all these things together, they are some of the causes of delay in contracts. You also have the issue of procurement. You don’t just go and award a contract without procuring it, you must follow the laws ok procurement.”

Eke who expressed satisfaction with the quality of job done, said the roads which are expected to last for more than fifteen years often suffer due to wrong usage, a situation he said the ministry plans to tackle.

“We also have what we call the ECOWAS protocol because we are in ECOWAS, we cannot be doing a different thing different from the ECOWAS. So if we enforce the axle load, these roads will last longer. But you know our people, enforcement is a problem, we only have to appeal to them. In the civilised world you don’t even have to appeal to anybody, they follow the rules and regulations. The question of axle load in the lifespan of a road is very important,” Eke said.

The contractor is China Civil Engineering and Construction Company (CCECC). And the lead engineer on the project, Mr. Harmmy told journalists that work was going on smoothly and expressed optimism that he will beat the project deadline and deliver by February 2020.

Several road users who spoke with CrossRiverWatch commended the move to rehabilitate the road which according to them, will reduce accident rates and improve access to the markets in the area.

It will be recalled that the federal government recently flagged off the rehabilitation of the Akpet 1 – Odukpani section of the highway.

By CrossRiverWatch Admin Our newsroom has confirmed that Mr. Kenneth Ishamali, aka Abacha, in-law to Cross River Co-Governor, Dr. Frank

By Archibong Jeremiah TechShack has concluded plan to hold second edition of Calabar Coding Class. Coordinator of the hub,