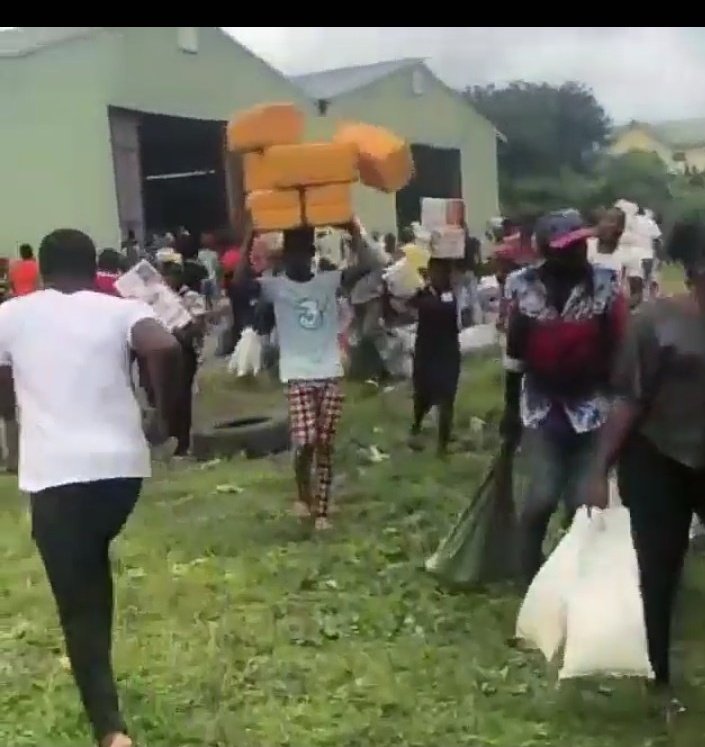 The Area Office of the Independent National Electoral Commission in Calabar Municipal has been torched by an irate mob.

Also, part of the Ministry of Work headquarters has been torched while the Calabar Mall which houses Spar was also attacked.

Furthermore, the premises housing the World Health Organisation (WHO) country office in Calabar, FHI 360 and the State Insurance Health Agency (AyadeCare) at Barracks road was ransacked.

Calabar, the Cross River State capital is currently trending for the ransacking of warehouses, malls, official and private facilities by a mob.

So far, CrossRiverWatch has also confirmed that the headquarters of the Cross River Newspaper Cooperation, publishers of The Nigerian Chronicle and Weekend Chronicle has been torched.

This follows the razing of the warehouse of the State Emergency Management Agency (SEMA) which housed foodstuffs. The warehouse and the media outfit are in the same premises.

The facilities are next to the premises housing WHO, FHI 360 and AyadeCare.

The Cross River State Government in attempt to manage the looting situation of COVID-19 palliatives imposed a 24 hour curfew.

But, beside the CROSPIL warehouse and council secretariat, the INEC Area Office, SEMA warehouse, Part of Chronicle as well as Spar among others were ransacked and torched after the curfew took effect on Friday evening.

Minutes later, Governor Ayade directed security operatives to enforce the curfew by mobilising, mount strategic road blocks and not to shoot any of the suspected looters.

According to the Government, the looters are elements who hijacked the march by those protesting against police brutality for days now.

Our newsroom observed that the looters made away with items ranging from office to household furniture and varieties of food items.

Am aide to the Governor, Ekeng Inyang sent a delivery note of items housed in CROSPIL estate in State Housing. The items according to the delivery note 130 bags of 10kg rice delivered on the 13th of October, 2020.

What Does It Take To Get President Buhari To Leave Office? – WITTY THOUGHT WITH KEN HENSHAW

This is a column by Ken Henshaw, Executive Director of We The People. Witty Thought is a brisk review

By Patrick Obia A suspected car snatcher, Ikechukwu John and and his spouse, Chibuzor Nduka, have been nabbed by