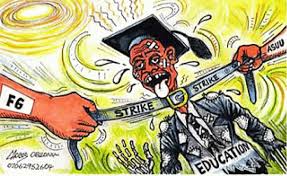 The Academic Staff Union of Universities, ASUU, has affirmed that come October 12 slated for schools resumption in the country, public universities will remain on closed.

The Chapter Chairman of ASUU, Cross River University of Technology, CRUTECH, Dr. Emmanuel Ettah made the assertion as a guest on Correct 97.3 FM, Calabar, morning show (Wednesday) maintained that, come 12 October 2020 when schools will be reopened as directed by the Federal Government, public universities will remain shutdown until Federal Government succumbs.

He said, “It is high time parents begin to question the integrity of the Federal Government on matters of Education. It is not a strategy that we just want to punish students, but to draw the attention of people that there is a problem in our educational system; if Government will not give us nothing in this country, they should give us quality Education. We have being in talks with Government since two years and they are not doing anything, strike is the last resort.

Also, the University of Calabar Chapter Chairman of ASUU, Comrade Edor Edor had on Hit 95.9 FM Breakfast Show shared same views as his Comrade in CRUTECH.

He said COVID-19 pandemic has come to expose the ineptitude of the President Buhari led administration as it concerns attention of Education sector in the country, noting that one of their demand revitalization of the Education sector.

“The Federal government of Nigeria, our politicians, our leaders have no interest in our Education sector not that they do not have the capacity.

ASUU have been on an indefinite strike since March 2020, a situation which the Minister of State for Education, Mr. Chukwuemeka Nwajiuba yesterday urged members of the Union to leave the teaching profession and consider going into farming, stressing that more farmers are needed in the country.

COVID-19: No Corps Member Tested Positive In Cross River – NYSC, Says Commissioner May Not Be Aware

By Emmanuel Unah, Vanguard Newspaper Workers of Cross River Basin Development Authority, CRBDA, have revealed that nothing was planted