Pastor Yemisi Kudehinbu In The News Again, This Time In Cross River… BY AGBA JALINGO 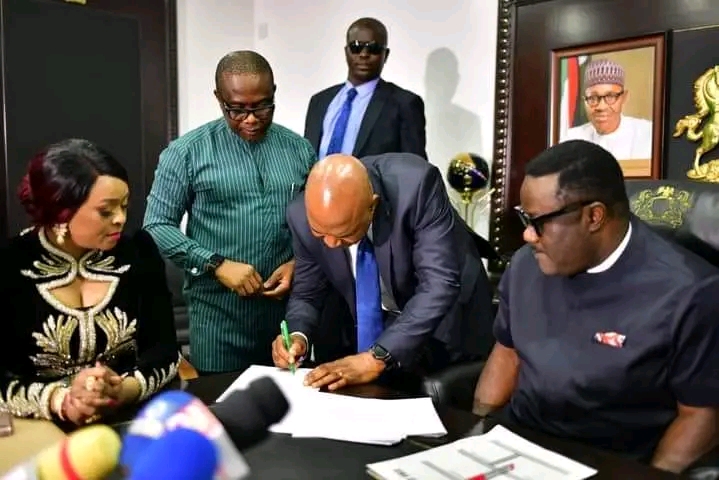 Governor Ayade yesterday signed a concession agreement to hand the 38 industries he says he has built, to a non-existent company he called HBMSL Consortium, headed by one Pastor Yemisi Kudehinbu, who was at the signing of the concession agreement in Calabar. The industries are then expected to roll out products into the market in the next three months.

Having failed in his privatization bid, the governor said he is resorting to concessioning the industries to the phony company HBMSL to ensure they remain State government owned but will be profitably managed by the concessionaire. While Pastor Yemisi Kudehinbu, has been celebrated as a vital part of the growth of Christ Embassy Church, who has been blessing her congregation with her powerful prayers and uplifting messages, the Pastor isn’t particularly identified with any outstanding business diadem, laurel, or track record and the company HBMSL does not exist.

Pastor Yemisi Kudehinbu, a graduate of Pharmacy, from the University of Lagos, who is currently the Zonal Pastor for Christ Embassy Lagos Virtual Zone (CELVZ), was in the headlines spree in 2014, when she reportedly sidelined the estranged wife of Christ Embassy Church Overseer, Anita Oyakhilome, from her key role and took over as the 13th Chief Executive Officer of Believers Love World Incorporated, an umbrella body in charge of Rhapsody.

At the height of their marital crisis, Anita Oyakhilome had sought a divorce in a London court based on allegations of adultery and what she described as her husband’s inexplicable behavior, which included living with female church members, amongst whom was Pastor Yemisi Kudehinbu, in his matrimonial home.

National Enquirer, reported at the time that: “one Pastor Yemisi Kudehinbu, a pharmacy graduate of the University of Lagos who is in her late forties played the role of his wife. Her closeness to Chris Oyakhilome dates back to the 90s when she was a Pastor of the Christ Embassy Student Fellowship. As soon as Anita traveled to London over the failing health of one of their daughters, Yemisi moved in with Chris. She lived with him, cooked for him, bought his clothes, drove him around, and traveled everywhere with him. However, she moved out anytime Anita was in Nigeria but returned as soon as Anita traveled back to London…

“Irked by this and many other developments which we can’t pen down, Anita Oyakhilome sought to be accorded more respect in her home and the ministry she co-founded. When her request was rebuffed by her husband, Chris Oyakhilome, she quit her job as Pastor, stopped attending the Church, and filed for divorce.”

Since that controversy died down, not much has been heard of Pastor Yemisi Kudehinbu, apart from her ministry work until recently when she delved into film production with her company, AngelWave Production, and debuted with a film titled, “5th Avenue,” an action movie that follows the tale of Senator Daniel, a member of the political elite, his quest for fairness and justice; and the family life of Peremo, his choices, and decision to cater to his family. Screening of the movie was held in Oregun, Lagos on the 28th of December 2021.

To now see my governor telling over four million Cross Riverians that he is signing an agreement to hand over State industries with a combined paper value of over N60Billion Cross River money, to a non-existent consortium, (because there is no such company as HBMSL) and a person who doesn’t have a track record of business achievement, is not only mind-bogglingly laughable, it leaves us to wonder what sort of a governor we have in Peregrino House in Calabar. Little wonder he has signed over 200 MoUs since he became governor and none has brought tangible returns. Because he is always going to arrange with some crooks, do some photo ops, and tell us he has signed whatever he calls the agreements, with investors.

I think our people, rather than be hopeful, should better ask Governor Ayade and Attorney General, Tanko Ashang, whether what they signed yesterday was a concession agreement on behalf of our State or it was a love letter.

Citizen Agba Jalingo is the Publisher of CrossRiverWatch and a rights activist is a Cross Riverian and writes in from Lagos.

NB: Opinions expressed in this article are strictly attributable to the author, Agba Jalingo, and do not represent the opinion of CrossRiverWatch or any other organization the author works for/with.