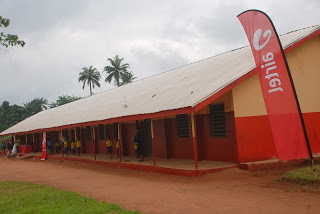 One of the leading tele-communications service provider, Airtel Nigeria, has demonstrated its commitment to primary educational development and the upliftment of underprivileged children by donating a borehole and academic learning materials to one of it adopted schools, Presbyterian primary school 2, Ediba,Abi Local Government Area in Cross River.

Speaking at the school which is the community of Senator Liyel Imoke, before handing over the projects to the school, the Managing Director and Chief Executive Officer, AIRTEL Nig, Mr.Shegun Ogunsanya, said the provision of safe and clean drinking water for both the pupil and teachers will help prevent waterborne disease which are often time preventable.

He said the clean water will also help keep the children within the school compound during school hours.

Ogunsanya who was represented by Airtel Regional Manager, South South, Mr. Onye Ikezuru charged the community to guard the project from vandals.

According to him, six months ago Airtel erected and furnished an 8-classroom block equipped with 120 desks, 8tables and chairs; there was also the need for clean drinking water and books for the pupils which Airtel had to meet.

The MD averred that the company’s initiative was in fulfilment of the promise it made that it was going to bring succor to the adopted school as part of its corporate social responsibility.

Airtel also awarded a scholarship of one hundred thousand naira to little master Favour Johnson for his outstanding academic performance.

By Oge Udegbunam and Mary Izuaka, Premium Times Twelve out of Nigeria’s 36 States paid the least attention to