Your Aircraft Is Undergoing Repairs With Us – Aero To Cross Riverians 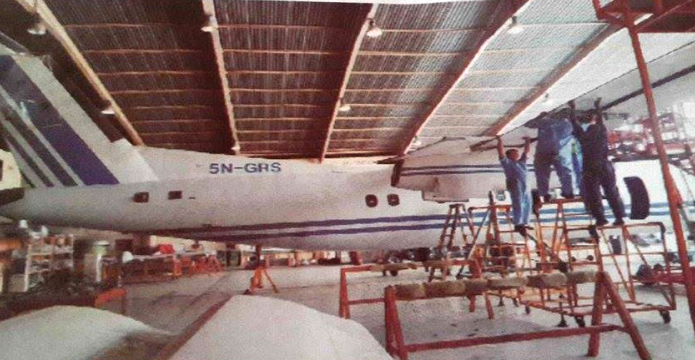 In what appears to be a frantic attempt by Aero Contractors to quell undying questions about the whereabouts of an aircraft the Cross River state government purchased from Rivers State since 2013, the management of the company has released a statement assuring Cross Riverians that the aircraft is undergoing repair work in their Lagos hangar and will soon be ready to commence commercial flights.

The statement which apologized to the immediate past governor of the state, Liyel Imoke and the people of Cross River state for the delay in the repair work, further stated that the aircraft, when delivered will be used to operate the Calabar – Bebi airstrip route to give tourists direct access to the Obudu Ranch Resort, a new route which Aero has already enlisted on its website.

The full text of the statement reads:

“However, due to logistic constraints, the maintenance has not been concluded; Aero Contractors confirms that it will complete the maintenance and deliver the Aircraft to Cross River state government not later than June 30th, 2015. Aero Contractors further reaffirms its commitment to restoring the aircraft as agreed with the Cross River state government and regrets any inconvenience experienced as a result of the foregoing.

“Aero Contractors is aware of uncomplimentary media reports, in some quarters, concerning the aircraft and hereby uses this medium to offer its unreserved apology to the (former) governor, His Excellency, Senator Liyel Imoke and the people of Cross River State, for the embarrassment and discomfort caused by the delay.

“The Cross River state government has also notified Aero Contractors that the aircraft will be operated on the Calabar-Bebi route to support the tourism operations of the state.

“Meanwhile, prior to the completion of the maintenance work to restore the aircraft back to service; Aero Contractors will commence scheduled weekend flights services with its DHC Q300 aircraft between Calabar-Bebi in the following weeks.

It will be recalled that the Cross River state government purchased the aircraft from the Rivers State government in 2013 and since then government officials have refused to disclose the cost or whereabouts of the aircraft but stakeholders and citizens of the state have also consistently asked to know details of the deal.