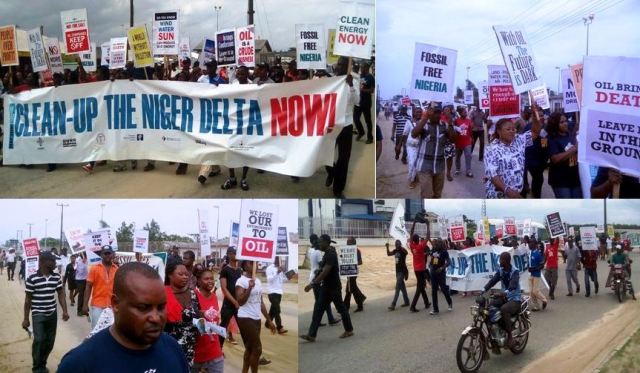 A Cross River based civil society organization; Peace Point Action (PPA) has led a peaceful protest against fossil fuel burning in the country. According to the PPA Director, Mr. Umo Isua-Ikoh, the protest is long over due in the South South zone of the country owing to the persistent effect of gas flaring in the zone.

Mr. Umo Isua-Ikoh before the protest in Ibeno village, Eket Community in Akwa IBom State, told CrossRiverWatch that PPA is the only organization in Cross River state that is working on the issue of oil spill and gas flaring with the National Coalition of Oil Spill and Gas Flaring, a development that necessitated the partnership with others in neighboring States to spread the gospel about the damage oil spill and gas flaring is causing to humanity.

Another speaker, Ken Henshaw, also maintained that life expectancy in the region has dramatically been reduced due to environmental hazards occasioned by fossil fuel extraction.

He revealed that according to scientists, the sea tide level will increase if fossil fuel extraction and distribution is not controlled.

On his part, Rev. Nnimbo Bassey, co-organizer urged everyone to join hands in the campaign against polluting our environment stating that the resultant effects of this pollution is adverse and can wipe away our existence.

The protesters were seen with placards bearing various inscription such as: Clean up Ibeno Now, Fish Not Oil, Clean-up Niger Delta, Break Free from Fossil Fuel among others.