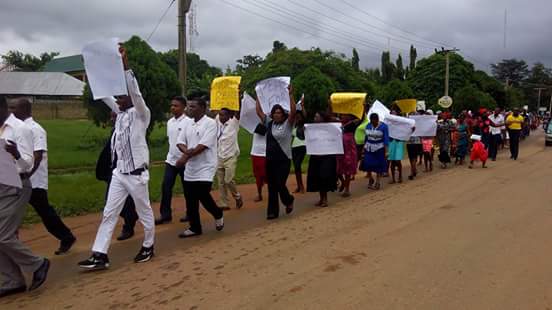 A peaceful society is possible if only people learnt to tolerate and forgive say the government and clergymen in Obudu local government area of northern Cross River State.

The call was made Wednesday shortly after a solidarity march from the council secretariat to the Federal College of Education via the Cyclist park led by clergymen from across the various denominations which took over 400 residents across major streets in Obudu as part of activities marking the 2016 World Peace Day.

He said that: “As we mark the United Nations International day of peace, peace as we all know is an un -negotiable phenomenon the world over. There is no Nation or state that lives in perpetual crisis that will have sustainable development.

“We can see for ourselves that the North East of Nigeria that has for sometime now been terrorized by Boko Haram sect has seen some remarkable set back in terms of development.

towards maintaining peace in the area.I also wish to appeal to the various security agencies in Obudu to continue to maintain the peace in order to sustain the development goals within our area” Akwagiobe said.

In his religious message, Reverend Father Chrisanctus Macauley called on Obudu people to embrace the message of God and his commandment to “Love your neighbor as self.”

He stressed the need for tolerance of religious, ethnic and socio-political differences for peace to continuously reign and lauded Governor Ayade for strengthening the security apparatus in the council area.

Other speakers included the Chief Imam of the Obudu mosque, Alhaji Yusuf, the Branch Chairman of the Christian Association of Nigeria, Reverend Emmanuel Achu among others as well as the Council Chairman, Emmanuel Ugbe who was represented by the Council Secretary, Barrister Obi Ogboaka.

By Jide Orintunsin, The Nation Newspaper Cross River chapter of the APC where Ntufam Hillard Eta hails from on

Updated: Investigation Will Be Launched Into Killing Of ACP Egbe Eko Edum – Police