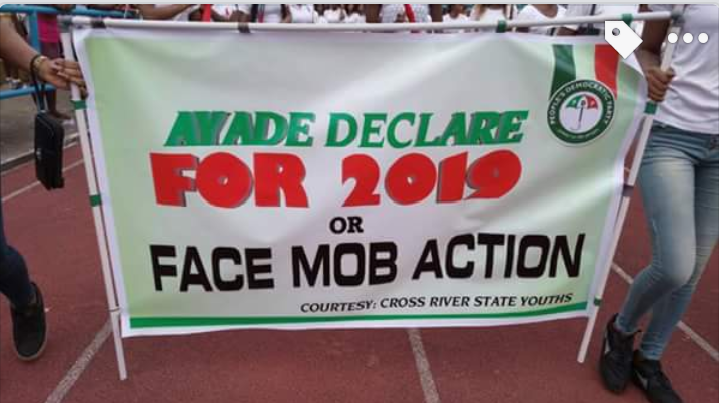 Some aides and supporters of Governor Ben Ayade have asked the governor to either declare to rerun for a second term in 2019 now or face mob action from his supporters.

The message was contained in banners and placards that were carried by the aides and supporters during the march-past exercise to commemorate the 2017 childrens’ day at the UJ Esuene stadium in Calabar.

Led in front by three SAs on Youth Matters, Mr Paul Ajie, Prince Godswill, Effiom Effiwat and the DG of the Cross River State Primary Health Care Development Agency, Dr. Betta Edu, the marches, beaming with smiles, gleefully displayed their banners and placards while waving at the governor who himself danced to the tune of the music.

One of the governor’s aides who supports the call for the governor to rerun told this reporter that “There are so many reasons why our digital governoŕ must return. He has embarked on projects never seen in this state before. Projects that will transform the fortunes of the state forever which is why a few persons are trying had to discredit his effort.”