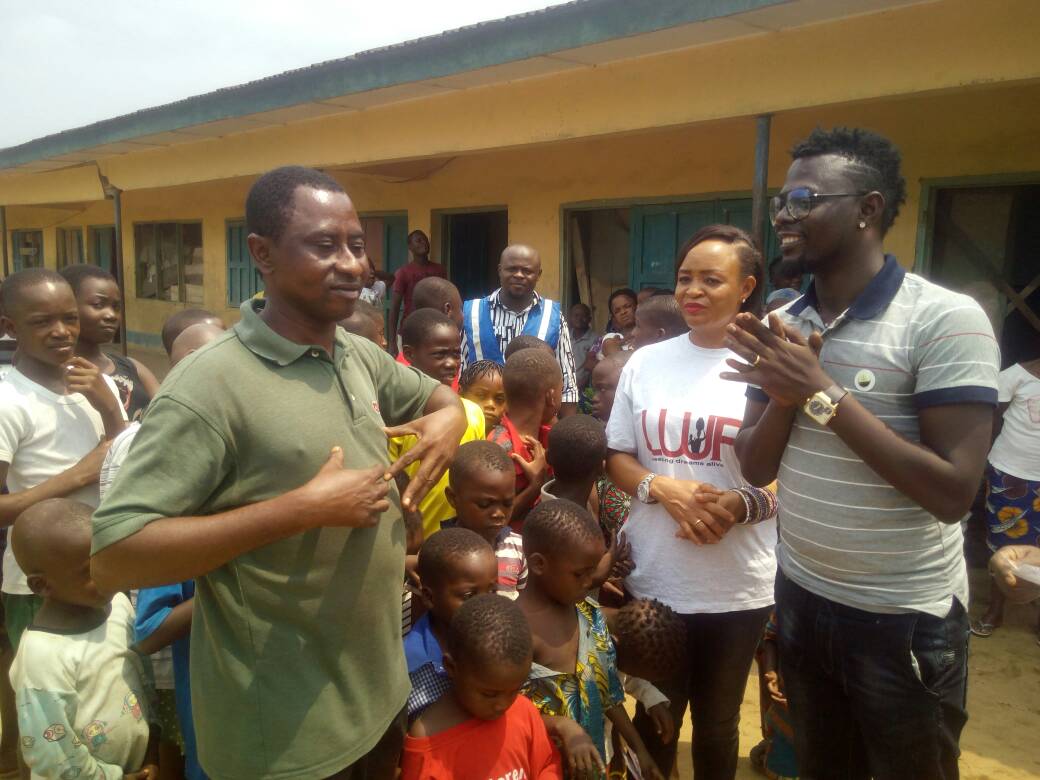 This formed part of activities marking his birthday which he decided to partner the Lily Williams Foundation to achieve.

Born Iloyi Oluwole Adebayo, the Ogun state native and mastermind of several hits including Cross River Born Bob Manny’s ‘Buhari’ said that: “I had this strong feelings that, why can’t you do something special? Why drink, eat and merry with friends why they are people out there without a home? That was one of the reasons I decided to do something special.

“Last year, same date on my birthday, my office got razed by fire and I thought it was over for me, but as God had it, I even have a better office now. That’s also another reason that inspired me to mark this day with the displaced people.

“I grew up in the streets, my father left me when I was little and I know what it feels like to be in their shoes. I thought of it until Lilly Williams Homes of Lilly Williams Foundation, a very good friend told me about the IDPs in Cross River State, that was how I navigated my way here and am happy I was able to put a long lasting smile on the faces of these people.”

This was his first visit to the state, but Indomix said that: “With the warmth embrace I got from these people, I promise to do more for the less privileged, the poor, the marginalised ones, and the entire world.

“I could feel their pains, they’re missing their soft feathering/foamy bed. They are here in an environment filled with dangerous animals, mosquitoes, snakes, scorpions and many others. They have been separated from the crowds, they’ve been left all alone.”

The IDPs commended him for his thoughts towards them with the camp secretary, Okon Etim Effiom disclosing that the over 3,000 IDPs have been in the Ikot Eyo Edem camp for about four years as the Ikot Effiom camp was too small and lamented the treatment meted out to them by Cameroon gendarmes.

“We thank Indomix for the wonder he’s created. We’re left with nothing until God sent him to us. He’s not from here but he feels and share our pains. May God bless him abundantly.” Mr. Okon said and accused government officials from Bakassi of never caring for them.

“People that help us are either individuals like Indomix, NGOs, private firms, United Nations, UNICEF. Our people who hold political power and are at the highest position to help us, never care about us,” Okon lamented.

Meanwhile, Lily Williams told CrossRiverWatch via chat that when Indomix contacted her for a place to connect with the less privileged, she felt the best place was the IDPs which she aided in the planning and called for more individual and collective efforts to improve the lives of IDPs.

“I feel we need to do more. We need to get more people involved to assist them, especially the politicians who they claim do not assist.

“If an outsider can come all the way from Lagos, what is their excuse? It doesn’t have to be about politics all the time show humility, empathy to this poor children they need our help,” Lily said.

By Archibong Jeremiah Information reaching our newsroom from News Agency of Nigeria, NAN, has it that Operation Akpakwu has clampdown

By Agosi Todo, The Guardian The Judiciary Staff Union of Nigeria (JUSUN) has decried request for negotiation of the 1999

By News Agency of Nigeria, NAN Gov. Ben Ayade of Cross River has introduced a Housing Scheme for Civil