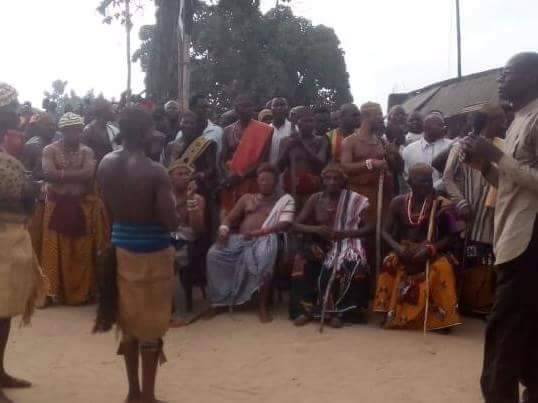 By Odey Ojeka and Okpa Fidelis

The Mkpani and Nko communities of Yakurr local government area have finally sheathed their swords after a historical peace pact brokered by the Obol Lopon of neighboring Ekori community, Obol Donatus Ibor Ofem.

This followed the performance of traditional rites between both communities last weekend which according to Mr. Ofem, was necessary as there was need for both communities to watch each other’s back.

“The reason I got myself involved and have never ceased praying for a time like this; I must tell all that even in the farmlands where you keep borders, always ensure to offer help to the other, eat and drink together,” he said.

Meanwhile, the Obol Lopon of Mkpani, Obol Sunday Obono in his remarks averred that both communities were related and like every family, there was need to gather and forgive in the event of any misunderstanding.

“If two brothers eventually indulge in fighting themselves and they come to realize what they did was wrong, it is not a bad thing that one must come for settlement in each other’s home.

“Since they have both realized it is not ideal living in jeopardy, they will accept peace and let go of every occurrences. On this note, we the people of Mkpani have accepted peace to embrace development in our communities.

“Myself and the Obol Lopon of Nko have seen to it that this is the only avenue we can employ to ensure lasting peace in our communities rather than other means. Let’s take cognizance of the past occurrences to be a lesson to us in future,” he said.

And, Mr. Obono told CrossRiverWatch that the first peace pact which was signed by seven out of the nine Yakurr communities was in error as there were certain processes that were in error especially as the treaty was at the instance of the disagreement between his community and that of Nko.

“The reason my community didn’t partake in the Yakurr peace pact covenant was because they did not do the right thing.

“I tried to correct them but they refused. So, that is why my community didn’t partake in it.

“The major reason for the Yakurr peace pact was because of the communal war between my community and Nko community.

“Indeed today, we have resolved to live in permanent peace among ourselves,” said Mr. Obono.

The event was attended by the Police and several traditional rulers. However, Mr. Ubana was absent and Mr. Obono said: “I have informed other Yakurr communities of this event. The Obol Lopon of Ekori was present with his people while others sent their representatives.”

The attendees at the peace pact later visited a place called ‘Ogbekewen’ before the visitors departed.

And, the grand finale of the peace pact is scheduled for later today (Wednesday).