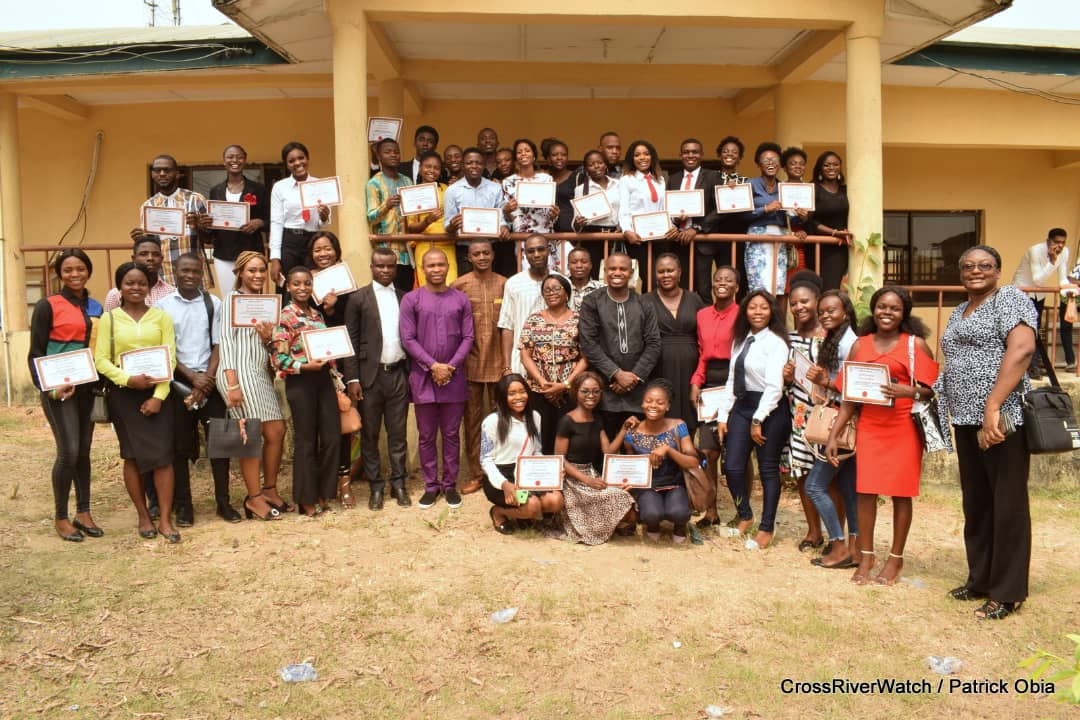 By Kelvin Ololo and Patrick Obia

The newly inducted 41 members into the Nigeria Union of Campus Journalist (NUCJ), Cross River University Of Technology (CRUTECH) Chapter have being charge to uphold passionately the ethics and codes of the noble profession not compromising as they go into the field to practise as campus journalists.

This was inferred by keynote speakers during the official inauguration and induction ceremony coming after many years of thwarted attempt to established a Chapel in the campus.

Addressing the inductees, the Dean of the Faculty of Communication Technology, Dr. Jacob Agba who was represented by Mrs. Edang Yolande Bassey told participant that the glory of the profession is in the field and not behind the desk, positing that it takes passion and nose for news to go far in the profession, in her words:

“The glory of a journalist is in the field and not behind the desk, is not all about glamour. If you don’t take the hazard you are just a secretary, shade your timidity.” She said.

In the same light, the Chairman Association of Cross River Online Journalist (ACROJ) Mr. Darlington Edem explained that though the profession has it hazard, there was need to be careful, calculative abiding on the ethics of the job by knowing and avoiding the pitfall while on the line.

He further advised them not to compromise the profession for fame, money or eagerness to be known, but through their little effort to change the narrative of the campus world, “you may not be able to change everything, but the little that you can don’t compromise.”

Saying that the association would partner with the union for better improvement.

The Managing Editor CrossRiverWatch Mr. Jeremiah Archibong who spoke on the theme; “Utilizing the New Media for Social Change” said that the journey starts with commitment and seriousness and by acquiring relevant skills in understanding the taste of the readers.

He further mentioned that the ability to change the society using new media lean on maintaining a balance content, fact checking and doing more of investigating reporting.

The acting Vice Chancellor Prof. David Ogar, represented by Deputy Registrar Academic, who was represented by Mrs. Saraya Ofem who commended the effort of the union pledged that the management of the institution will fully support the development in the campus.

The NUCJ CRUTECH chapter President, Godwin Otang in his closing remark pledged to lead by example. He urged his members to be committed.

The highpoint of the ceremony was oath taking lead by Barr. Obeten, Ebri Ebri and group photographs.