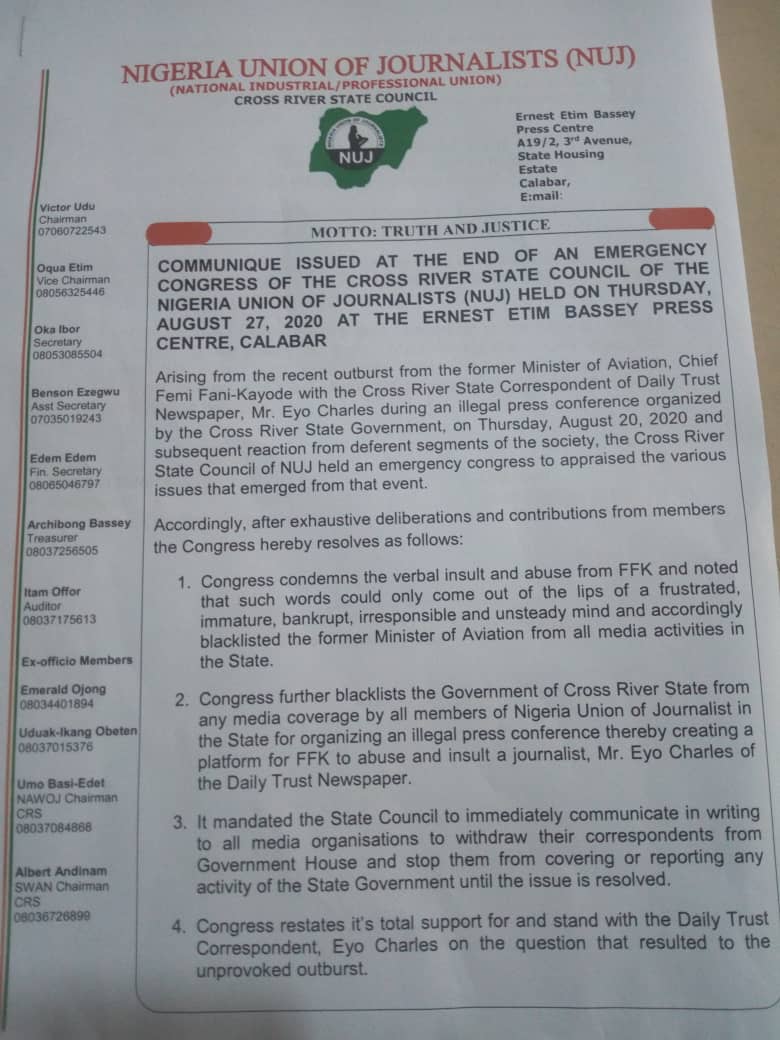 The Cross River State council of the Nigerian Union of Journalists has blacklisted the State government from any coverage for providing the platform where a former aviation minister, Oluwafemi Fani-Kayode used in verbally assaulting a DailyTrust reporter, Mr. Eyo Charles.

The council also directed the executive to write media houses to withdraw their correspondents from Government House Calabar.

These, among others were resolutions from its emergency congress held on Thursday, August 27, 2020, a week after the Mr. Fani-Kayode had attacked Mr. Charles.

According to a communique signed by the Chairman, Victor Dan Udu, Secretary, Oka Ibor and the Chairman of the communique drafting committee, Richard Ndoma, the journalists who attended the presser at the private hotel of Governor Ben Ayade are to “individually write an apology” letter for not defending their colleague.

Also, the council proscribed the “illegally operated” Government House Press Corps and directed that all pressers be held at the NUJ center unless otherwise directed.

Furthermore, the union said it stood by Mr. Charles and the question he asked that provoked Mr. Fani-Kayode. Mr. Fani-Kayode who initially refused to apologize, later said he is withdrawing the use of the word “stupid.” He arrived Uyo, the Akwa Ibom State capital midweek and the Akwa Ibom council of the NUJ has since directed it’s members to stay away from any presser convened for him to speak.

“ In line with the disposition of the national leadership of our great Union, the State Council has directed that no journalist should attend a media parley with Femi Fani-Kayode or any of his activity at any location in Akwa Ibom State. The NUJ is not part of the visit,” read the directive to all chapels signed by the State chairman, Comrade Amos Etuk and the Secretary, Comrade Dominic Akpan.