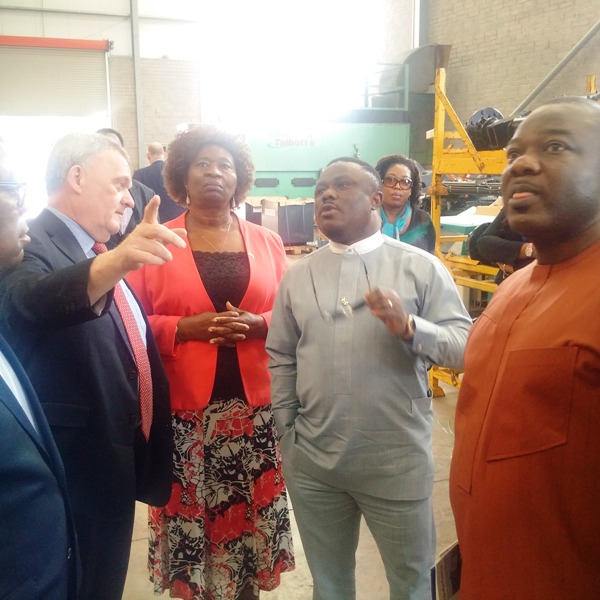 Cross River State Governor, Senator Ben Ayade’s has met with investors in the Republic of Ireland, some of who have expressed willingness to set up a tractor manufacturing plant in the state.

Ayade, who spent the first day of his visit between Dublin and Monaghan listening to presentations from various Irish investors and businesses, was particularly excited by the presentation from the Affordable Building Concepts Limited chairman, Redmond Cullinane.

Cullinane informed the governor and his entourage, including Nigeria’s Ambassador to Ireland and Iceland‎, Bolere Ketebu, that his firm can build a home in just one and and a half day.

The system used in constructing the homes, which he calls off site, is expected to “increase tenfold in 2020 with this type of system making up over 50 percent of the current construction.”

He said the system is the quickest way of fulfilling modern housing needs at a more competitive cost ‎which still ensures good and modern building standards.

The Governor revealed that his administration would adopt the system to build 5000 homes for the poor and unemployed.

Catering for this class of people, he said, was the most compelling reason why he is in public office.

As such, the focal point of his administration in on how to lift as many Cross Riverians as possible out of poverty.

He later inspected prototypes of the homes at the company’s warehouse in Monaghan.

The governor however, demanded that given the number of homes his government is willing to build, the firm should consider siting its manufacturing plant in the state.

The governor also announced that the state was willing and ready to partner with an Irish Dairy to establish an Ice cream making factory in the state.

He disclosed that his administration has already agreed in principle with Cavenco of Spain to establish a Dairy Farm, which he believes will revitalize the moribund cattle farm at the Obudu Ranch Resort.

At the Nigerian Embassy in Dublin where he listened to a presentation by the Atlantic Flight Training Academy, the governor declared that the state would send some of its young graduates to the institute for Aviation training with the long term prospects of building an airport in between Ogoja and Yala.

One commentOn Governor Ayade Promises 5000 Homes For The Poor