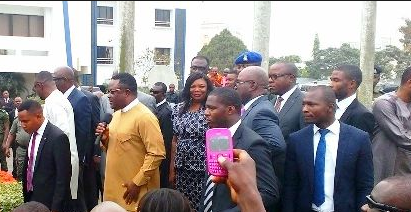 CrossRiverWatch can authoritatively report that there was a serious security breach on Friday, December 9, 2016 in the Abuja residence of the Cross River state governor, Senator Ben Ayade leading to the loss of two of the governor’s GSM phones.

CrossRiverWatch gathered that the euphoria of the Supreme Court victory threw the entire security team into the same frenzy with the supporters of the governor and they let down their guards for two thieves who took advantage of the breach to steal the phones from the governor’s house while the celebration lasted.

A source in the governor’s residence told CrossRiverWatch that, “After everyone had gone leaving only a few people around, oga started asking who he gave his phones to but no one could answer the question. He kept asking for his phones repeatedly and no one could answer and there was commotion everywhere at a point because he really got very angry with his security people.”

This reporter gathered that, after three days, the governor’s security team still could not do anything about the missing phones until a private firm was contacted to track the phones which were later recovered and the two thieves arrested.

Our reporter gathered that the two thieves are both male and from Cross River state. One is from Obanliku LGA while the other is from Yala LGA and both of them have been handed over to the police for investigation.