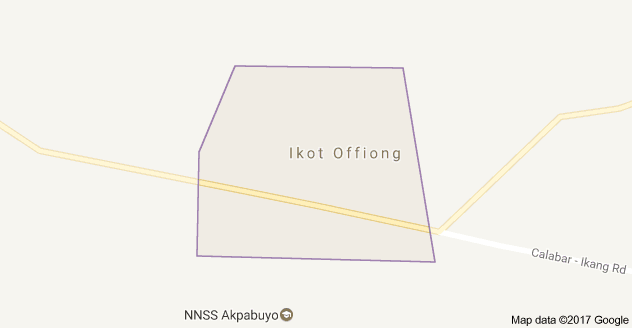 The people of Ikot Offiong, who are an Efik speaking tribe of Calabar, were said to have been dislodged from their settlement at Ayadehe community, Oku Iboku council, over the decades.

It was gathered that in the clash between the two communities, which started Friday night, combatants from both communities used sophisticated weapons.

It was further gathered that the highest number of casualties was on the Ikot Offiong side, as they were allegedly ambushed in the attack and chased to a neighbouring community in Odukpani Local Government Area of the state.

It was learned that travellers along the major link road between the two states, the Calabar-Itu high way, were held hostage for hours on Saturday until soldiers arrived the scene and chased the hoodlums away and cleared the road for smooth movement of traffic.

An eyewitness bemoaned the actions of the people of Ikot Offiong and wondered why they should start another war after both communities had entered into a peaceful settlement since 2014.

The eyewitness who spoke to newsmen on grounds of anonymity, said that the recent attack which was the third in recent times, must have been sponsored, adding that both communities have no justifiable reason to kill each other because they inter-marry.

The Police Public Relations Officer, ASP Cordelia Nwawe, confirmed the clash, but said the police was not in a position to speak on the casualty figure.

Meanwhile, on another front, community leaders in Obubra Local Government Area of Cross River State have told Governor Dave Umahi of Ebonyi State to steer clear from the internal crisis of communities in Cross River State.

This is just as the member representing Obubra/Etung federal constituency of Cross River State, Mr Mike Etaba, has sued for peace among warring communities of Obubra so as to attract development to the area.

It will be recalled that about nine people were killed penultimate week and several houses destroyed in renewed skirmishes between Igbo speaking communities of Obubra, Ohanne Edda and their neighbouring Ogurube community while about 2,000 people are allegedly displaced.

A motor-cycle operator, Jonah Isangha, who was allegedly beheaded and his head allegedly used to perform the ritual rites for a chief in Ohanne Edda, sparked off the crisis in the community.

Briefing newsmen in Abuja, weekend, one of the community leaders and former member of House of Representatives, Chief Ernest Irek, accused the Ebonyi State Government of interfering in the internal matters between communities in Cross River State.

He expressed surprise over the involvement and interest expressed by the Ebonyi State Government even when the communal crisis was between communities in Cross River State.

When contacted, the Commissioner of Police in Cross River State, Hafiz Mohammed, said he was not aware of the incident because he was only a week old in the state but promised to investigate.

But the Divisional Police Officer, DPO, in Obubra, Noah Ntuen, confirmed the beheading in the area and said that the picture of the deceased was in his office.

He said, “If you want the picture of the deceased, it is in my office. The incident happened on January 10 and 11. I was the one that removed the corpse. But I am not aware if the blood was traced to anybody’s place. The situation is under control now.”

Ohanne Edda people trace their link to Ebonyi and speak the same language but the area was ceded to Cross River and named as returning communities by the Justice Nasir Boundary Adjustment Commission after the Nigeria/Biafra civil war.