In Breaking News, Entertainment and Lifestyle 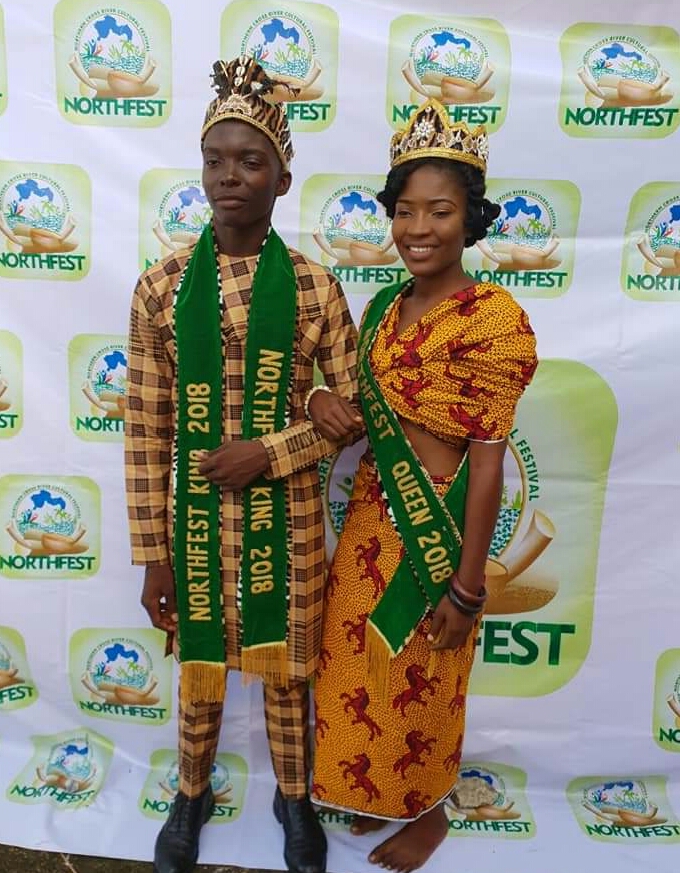 The emergence of the new King and Queen of the Cross River North Festival (NorthFest) pageant held in Ogoja was preceded by drama and confusion, CrossRiverWatch authoritatively reports.

Lifu Yokyshor Lifu from Ogoja emerged as Queen and Patrick Joseph Adie from Obudu local government area as King after the contestants were made to vote following a halt in the pageant proceedings due to fights and protests from the audience who accused the organizers of eliminating their favorite.

An eyewitness (names withheld) told CrossRiverWatch that after the Judges announced the top ten category; five each for the male and female category, the audience disrupted proceedings forcing the organizers to escape with the judges and other contestants.

“They could not continue with the pageant and it ended like that with the judges and others chased out,” the eyewitness added.

The secretary of the pageant’s planning committee which is a subcommittee for the main festival, Mr. Noel Ugbong confirmed this to CrossRiverWatch and explained how the winners emerged.

“Yes, it brought issues, that is true,” Mr. Ugbong said, adding that: “Each contestant has a support base and at the end of the day, they weren’t satisfied.”

The incident occurred at about 5:30 AM and Mr. Ugbong said he had asked that the pageant should be put on hold while the contestants reconvene later in the day where he announced that the contestants will vote who will emerge winner.

“They started the nomination. (I said) everybody should nominate three persons whom they feel should make the top three and they did.

“We took them gender by gender. For the males, we called the leader of the females to do the counting and not us. After counting, we got the first three. They were two guys that were not around but later came.

“After that, we did for the ladies and we got four because two people had a tie. We now said since the guys were complaining, they should vote in one more person to make it four for the finals and they did and we now had four girls and four guys for the finals.

“They now did another round of voting and then we got eventual winners, first runner ups and second runner ups.

“This time around, the results came from themselves, we refused to be involved because since they were not satisfied with the results of the judges and if we still bring another set of judges, they will complain,” Mr. Ugbong said.

A total of 29 people comprising 11 males and 18 females had contested and participated in the voting process. And, two who spoke to CrossRiverWatch confirmed this and expressed mixed feelings concerning how the pageant ended.

They accused one of the female contestants of sponsoring those who had disrupted the process.

Also, CrossRiverWatch gathered that the venue was not properly policed as security officials were few in number which another member of the organizing team said was due to the fact they did not anticipate an unruly behavior from either the contestants or audience.

However, these were not the only issues rocking the pageant which is in its second edition with allegations of request for sexual gratification among others.

But, Mr. Ugbong denied these saying that: “At the end of it all, anyone who does not succeeds, will look for something to hold on to.”

He rather accused the contestants of trying to induce the organizers with sex and maintained that he has remained above board in his dealings.

“Some of them have approached me, some of them have asked people to call me. There is nothing they or anyone can give me. If they allege that I am in a relationship with any of them, let them mention the person’s name. There will always be someone to complain and that is why we refused to be involved,” he said.

On allegations that he may have collected monies meant for the pageant, Mr. Ugbong averred that: “We told them that there was going to be audience participation; that the audience was going to vote and that it is the ticket that will allow them to vote. They started collecting tickets. They will collect tickets and call again to collect more.

Explaining why he used his own personal account to collect the third fee, Mr. Ugbong explained that the organizers, “did not want to conflict” the first two, “because some were paying cash, some were paying (through) transfers,” he said.