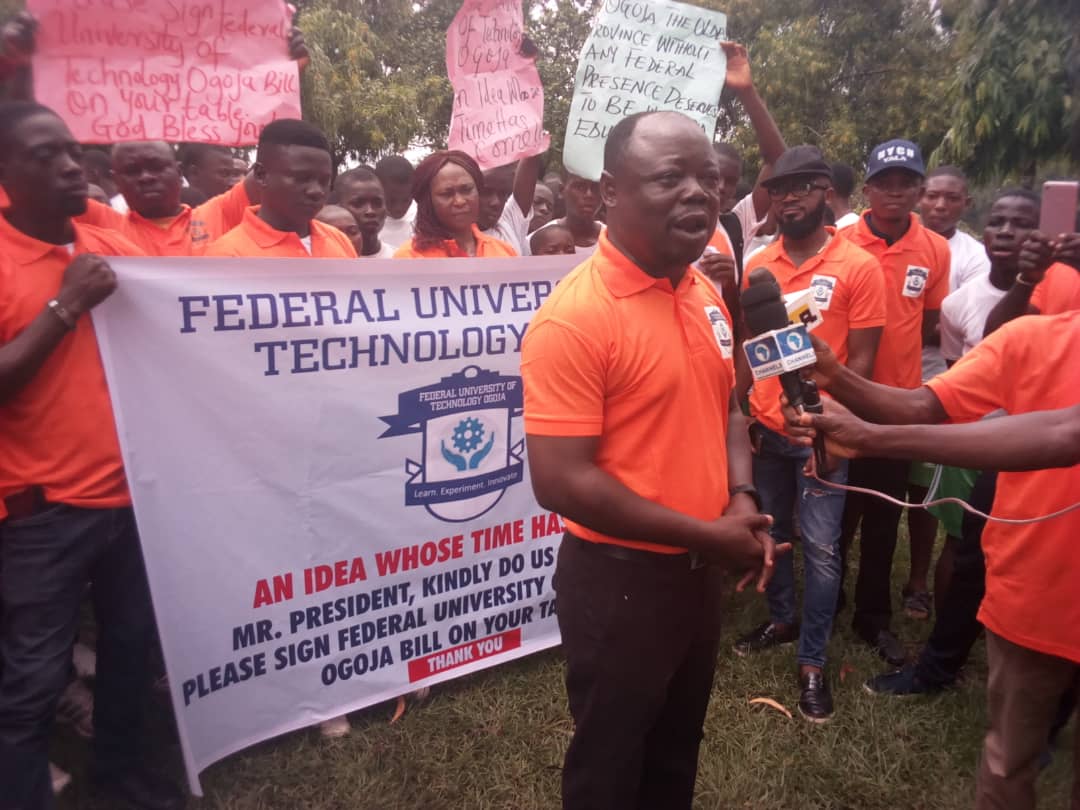 A Non-Governmental Organization, Greater Ogoja Development Initiative has called on President Mahammadu Buhari to sign into the bill before him for the establishment of the Federal University of Technology, Ogoja which passed the third reading and before his table for presidential assent.

The group made the call at the sensitization rally that started from Government Secondary School through Igoli and terminated at the Duke park.

Addressing the press at the Duke park, the Team Leader, Mr. Mike Udam stated that “We decided to embark on this rally to create awareness of what is going on, majority of our people are not aware of our demands, that is why we have taken to the streets. We have written a letter to the President requesting him to give assent to the bill which sponsored by our son Hon. Jarigbe Agom to establish the Federal University of Technology, Ogoja.

“The importance of this university can not be overemphasized as majority of those seeking university education in Federal institution need to travel to Calabar and other States.”

On his part, Chief Moses Ale Ujum noted that the old Ogoja province is the only province that yet to have a State.

His words, “If we cannot get Ogoja State, let us be given the Federal university of Technology, Ogoja which is before the President for his assent. Let me use this opportunity to congratulate the President for his victory at polls in the last general election and I pray God to grant him wisdom as we look forward to his assent on the bill to establish the Federal university of Technology, Ogoja.”

The Patron of the group Chief Hart Modey stated that “it has become pertinent and imperative to draw the attention of Mr. President to the developmental strides and challenges of Cross River State Northern Senatorial district. The district have been neglected politically, socio-economically and now it is the right time to rise up to the occasion and demand for this essential developmental project in order to enhance economic growth in the district.

“It is a known fact, that globally, technology has become the necessary ingredients and bedrock of economic growth and development in any part if the world. This clarion call for the establishment of Federal university of Technology in Ogoja is long overdue and timely owing to the our children over the years have been traveling far and wide to in search of higher education.

“Finally, as law abiding citizens of Nigeria, let me use this opportunity to urge you all to be peaceful, law abiding, avoid violence in the course of exercising your fundamental human rights and don’t give hoodlums the opportunity to hijack this phenomenal, historical and very important developmental demand.”

The National Youth Council of Nigeria Coordinators for Ogoja and Yala Local Government Areas, Atunishir Aju and Okayi Abraham took turns to call on the President to give assent to the bill which is very imperative in building the youth to enable them build the nation which reaffirms the slogan of the youth.

Speaking for the women, Mrs. Veronica Ojisor called on all and sundry to rise to the challenge of the moment, to ensure that the needful is done to get the President to assent to the bill.

When CrossRiverWatch spoke to some of the spectators of the rally, majority of them said they were not aware of the University coming to Ogoja and when briefed about the Bill waiting for Presidential assent, Mrs. Theresa Odey who sells garri along Mission road at Igoli expressed happiness that if the University is established, it will save her the stress of sending her children to University of Calabar, considering the transport fare to Calabar and the high charges associated with CRUTECH.

A motor cycle rider, Mr. John Modey noted that the University is sure going to boost their business and create job opportunity to the teaming youths who are idle.