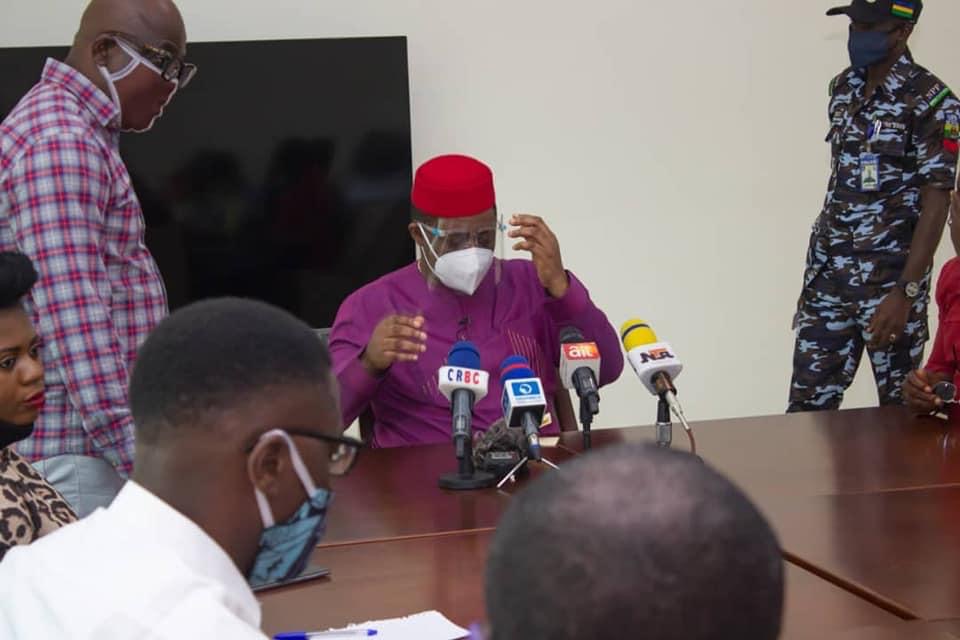 Fani-Kayode in a statement shared on his verified Facebook page on Tuesday said that Mr. Charles incomplete question was an “assertion” and an “insult.”

The ex minister had toured some projects of the Governor Benedict Ayade’s administration after he warned party members to respect the Governor’s decision in the People’s Democratic Party and ended a presser with select journalists at a hotel belonging to the Governor when he embarked on an over two minute verbal tirade against the journalist who has said he sought to know how Fani-Kayode financed his tour of States.

And, despite drawing the ire of journalists and the Nigerian Union of Journalist (NUJ), Mr. Fani-Kayode who erroneously referred to Cross River State as “Cross Rivers” in his statement, explained that Mr. Charles’s question was a “gratuitous insult.”

“During my tour of the South and after a long and successful press conference in Calabar, Cross Rivers state, a journalist put up his hand for the last question and said,

“Well we do not know who is bankrolling you”.

“This is not a question but an assertion and an insult.

FORMAL STATEMENT ON THE ENCOUNTER WITH A RUDE JOURNALIST IN CALABAR, CROSS RIVERS STATE.

During my tour of the South…

“And if this insulting assertion were made before Trump or OBJ I know how they would have reacted,” the ex minister said, adding that he has “no apology to offer for it.”

He continued: “The young man apologised to me during the press conference and sent his apologies to me after the conference. I have accepted his apologies in good faith and moved on.

“I have always had respect for journalists and I always will. Those of them that know me or have worked with or for me over the last 30 years can attest to that.

“However there is a distinction between asking a question and offering a gratuitous insult.

“This is all the more so when it is clear that the assertion was sponsored and engineered by my political enemies who wanted to use the young man to insult and embarrass me and question my integrity. Well they got more than they bargained for.

“I repeat this was not a question but an assertion and an insult and I will not accept that from any man born of woman. Thank you.”

Furthermore, he alleged that the publication by DailyTrust which said he will be held responsible should anything happen to Mr. Charles was false.

He wrote: “Permit me to add the following to my earlier statement. I have taken note of the report by Daily Trust on the incident. The content is false. I didn’t send any of my security men to threaten their reporter.

“I only reprimanded him for a premeditated plan to embarrass me and he apologised thereafter. That was all.

“This is not a battle between me and the esteemed Nigerian journalists who respect the ethics of the noble profession.

“I have always been and will always be a friend to journalists and a champion of freedom of speech. What I will not accept are brazen insults from an individual in the name of journalism.

“The assertion or assumption that I am being bankrolled by anyone is deeply insulting.

“Finally to the NUJ I say you have got me completely wrong. It would have been better if you had heard my own side of the story and established who was behind this whole incident and attempt to embarrass me, who paid for it and how much they paid before going to press. Nevertheless I still hold you in high esteem.”

At the close of yesterday, after pondering some of the comments I read on the social media, I woke

I Had No Hand In Onnoghen’s Removal As CJN, Says Obono-Obla