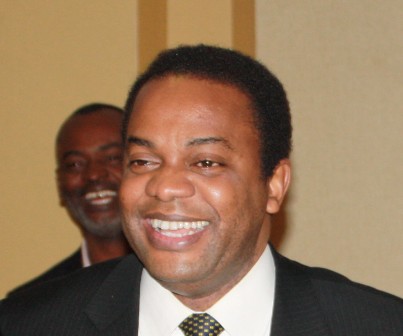 The former governor of Cross River State, Mr. Donald Duke yesterday stole the shine at the PDP presidential rally held at the U.J. Esuene Stadium in Calabar when he openly challenged President Jonathan to find a political solution to the 76 oil wells that the state lost to Akwa Ibom State.

The former governor made the charge when he was granted the chance to speak by the People’s Democratic Party, PDP National Chairman, Alhaji Adamu Mu’azu who referred to Donald as “My beloved son” while inviting him to the podium.

When Donald took the stage, he assured Jonathan that he had won the election already but went further to throw the punch that reverberated all over the stadium: “Your Excellency you came to celebrate your victory not campaign, there are three things we will ask you of when you return in May, these three things are within your power. One is about our oil wells, give us a political solution to our lost oil wells, fix the federal roads in our state. It takes five hours to travel from Calabar to Ogoja. Since you’ve finished doing charity abroad, come and do it at home, from Calabar to Akwa Ibom, here to Ikom and other parts of the state needs your attention”.

The third request was swallowed in the cheers from the crowd which reverberated round the stadium.

It will be recalled that in a landmark judgment by the Supreme Court, Cross River State lost its status as an oil producing state with the stripping of its 76 oil wells to neighboring Akwa Ibom State.

By CrossRiverWatch Admin Okoi Obono-Obla, a former aide to President Muhammad’s Buhari on prosecution has said his continuous travails

“I Was Detained For 5 Days, Beaten Up Regularly, I’m Praying To God,” Says Owner Of Demolished Calabar Hotel

By Cletus Ukpong, Premium Times The man whose hotel in Cross River State was demolished by the State Government has denied the allegation that the