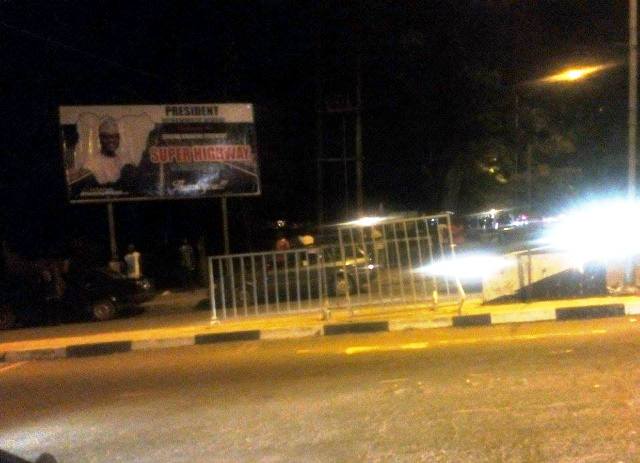 The city of Calabar, Cross River’s capital is wearing a new look with preparations in top gear for President Muhammadu Buhari’s visit to flag off the superhighway scheduled for tomorrow, Tuesday October 20, 2015.

From the early hours of Monday, security operatives could be seen sweeping through nooks and crannies with populated illegal parks in areas including Watt roundabout, Murtala Muhammed Highway and IBB way as well as Ndidem Usang Iso road all cleaned up with officials of the Department of Public Transportation visible with violation tickets in hand to scare drivers from falling victim as warm up for tomorrow.

Across major routes suspected to be used by the President’s team, billboards with congratulatory messages are visible with metal works used in blocking routes placed at strategic locations which means a traffic gridlock is to be expected during the duration of the President’s visit.

A police helicopter was also making rounds between the hours of 3 and 4 o’clock with speculations the military agencies in the state are planning a befitting parade for the President in what could be viewed as Governor Ayade’s trademark, having been accused of showmanship in some quarters.

Meanwhile unconfirmed reports reaching CrossRiverWatch suggest the presidential advance team consisting of security operatives and gentlemen of the press have been arriving since yesterday with speculations they might be lodged in Transcorp Metropolitan hotel and Monty Suites which has served officials in past administrations with a particular unit including the Explosive Ordinance Disposal men sweeping the area for the ground breaking ceremony, in Nsan and Obung communities.

Elsewhere, several groups have been calling top government functionaries to inquire as to the President’s itinerary to give him a befitting welcome just as CrossRiverWatch government house correspondent reports that the governor might be contented with the preparations on ground so far having turned on his decision to visit the site earlier this evening barely 48 hours after he visited the place, meeting with the people and soliciting that they come out en mass to welcome the President.