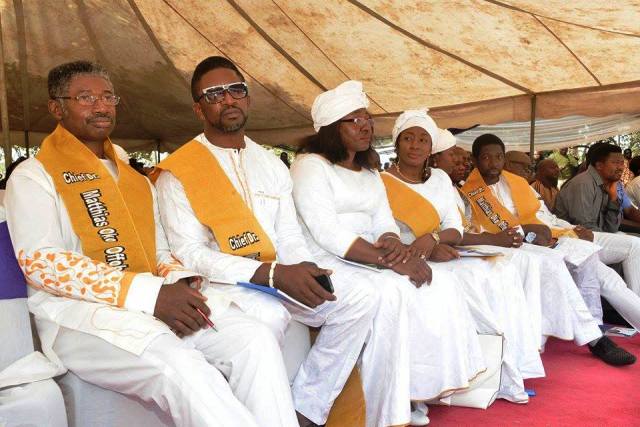 The remains of late Deputy Governor of the old Cross River State, Mathias Offoboche has been laid to rest in his hometown Okuku in Yala local government area with past and serving governors of the state as well as Akwa Ibom state attending the burial rites.

Cross River’s governor, Benedict Ayade in his tribute to the late Offoboche described him as a man “whose whole life was dedicated to the struggle of Ogoja state”.

He eulogized him for sacrificing his “vitality, strength and youth” for the emancipation of his people and the actualization of his dream that an Ogoja man will someday become the governor of the state.

Ayade in a poetic manner ‘shamed’ death for coming “through the window instead of the door”. Continuing, he said “if death was to be a river, it will be black in colour. If death were to be a bird, it will have no song, it will not fly”.

He however added that the former deputy governor had lived up to the biblical requirement of 70 years and crossed it, allowing him to see all his children mature, and see the actualization of his dream that an Ogoja son is now the governor of Cross River state.

He urged his family to “cry no more for it is the plot of mankind that we all must face that route”. Charging all present to use the moment to reflect on their lives, he reaffirmed his commitment to running “a people centerd government”.

The deputy governor of Akwa Ibom state, Moses Ekpo who was the Director of Information during the administration of the late Clement Isong and Mathias Ofoboche as governor and deputy, in his tribute on behalf of the Akwa Ibom state government said the late Offoboche was part of “one of the best performing administrations in the country from 1979 to 1983”.

He described him as a man “who was totally committed to socio-economic and geopolitical equity with a conviction which enforce his total support for the creation of a new state for the Akwa Ibom people”.

He added that his demise has created a void in the ranks of seasoned medical practitioners and political administrators. He prayed God to grant Akwa Ibom and Cross River states as well as his immediate family the fortitude to bear the loss.

In her tribute, the wife of the deceased Offoboche, Barrister Juliana Offoboche expressed her anger for the demise of her husband because she missed him “so much”.

She described him as a “constant friend who stood by me in all my trials”. She then chronicled her life with him saying that “I was born on October 4th to be your wife; you took me to the altar on October 4th in holy matrimony. I was your first and only wife in your lifetime; you were my first and only husband. We endured so many trials in this earth together, seeing 46 October 4th anniversaries together. And now my darling husband, my love and my rock, you have given up the ghost on October 4, 2015 asking me to take my time on that lonely journey to join you.”

The emeritus Archbishop of Calabar Metropolitan Archdiocese, Most Reverend Joseph Ukpo in his own tribute said the late Offoboche as pioneer student in MaryKnoll College always came top in class from their first term in school to when they sat for their Cambridge examinations. In a seemingly fond manner, he described him as the “laziest athlete”.

Ukpo who spoke highly of him added his service to God was evident in his rise to a 4th degree Knight in the Order of Saint Mulumba. He prayed God grants all the fortitude to bear the loss and promised to shoulder his responsibilities in his family.

His remains were later interred in his family compound with family, friends, well-wishers and associates in attendance.

Governor Ayade later left for MaryKnoll College on the request of Archbishop Ukpo to inspect facilities where he disclosed plans to build three world class model secondary schools in the state.

On his way back to Calabar, he inspected work at the Ikom axis of the Superhighway and has since returned to Calabar in time to for the test running and eventual commissioning of the 1.1 kilometre long monorail.