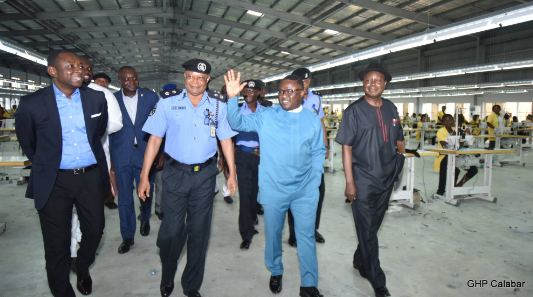 Cross River State Commissioner for Police, Mr. Jimoh Ozi-Obeh, yesterday, described the Calabar garment factory as a very fantastic facility with a huge capacity to produce the entire uniforms for the Nigerian Police.

Ozi-Obeh disclosed this in Calabar when he was conducted round the factory by Governor Ben Ayade to assess the readiness of the factory to produce uniforms for officers and men of the Nigerian Police.

It would be recalled that a few months before the Commissioner’s visit, the Inspector-General of Police had assured of the force’s wiliness to partner the state government for the production of uniforms for men of the police force.

Voicing his excitement, the Commissioner stated: “The facility here at the Calabar garment factory is fantastic and of world standard. I have never seen such a large number of automated sewing machines before.”

According to Ozi-Obeh, “I am very pleased with what I have seen here. The state government is on course, and with the quality and sophistication of the machines, there is no doubt that the factory has the capacity to make uniforms for the entire men of the Nigeria Police. The tailors are also thorough professionals. I was surprised that one of them told me the exact size of my trousers without even measuring me.”

Speaking on the partnership, Governor Ayade said: “This is good news for the people of Cross River State, ‘it is a pass mark for the state government and its people.”.

Ayade, who also stressed importance of the partnership between the police and the state government, said: “The good news is that we have the Commissioner of Police in Cross River here who is doing a ground trooping and final analysis and state of preparedness of Calabar garment factory in readiness for the partnership we have entered with the Inspector-General and the Nigerian police.

“We are happy that he is here in person and has done a guided tour of the facilities and has shown excitement that he is impressed. In fact, he is impressed with our ability and speed to turn around a pair of trousers for just between 20 and 30 minutes. He is not in doubt that the Cross River garment factory can produce the entire uniforms for the police. By this, it is a pass mark for the people of Cross River State.” He added

To ensure effective and efficient management of the factory to meet international standard, Governor Ayade said “the state government has entered into a partnership with some Indian consultants to give some expert advice to the factory.”

Ayade also revealed that in the next three years, the state government would have grown the cotton to provide the necessary raw materials for the factory, adding that an arrangement has been concluded now with some Chinese and Indian firms for the production of fabric for the factory.”

By Archibong Jeremiah Information reaching our newsroom has it that, the Cross River State Governor, Sen. Ben Ayade has