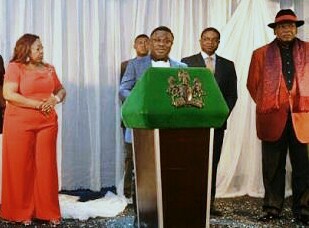 Unconfirmed information suggests the meeting may also have included former Governor Donald Duke and several others.

The meeting held at the Presidential Lodge and lasted over 6 hours.

Mr. Ayade had departed the Peregrino lodge at a few minutes past 7:00 PM with Government House Correspondents thinking he was heading for the première of two movies produced by Callywood, at the Tinapa Premier Business and Leisure resort but then instructed his convoy to turn into the presidential lodge where his guests were already waiting.

Ita-giwa had arrived earlier in her black GMC Escalade while Edem Duke visited in his black Range Rover Evogue.

The meeting which lasted far into the night may have been about strategies for the 2019 elections and the aspirations of the southern senatorial district government house sources told CrossRiverWatch.

Both, formerly of the Peoples Democratic Party, defected to the APC earlier this year.

Mr. Duke and Ita-Giwa have been reached for comments.