Agba Jalingo: Secret Testimony Of Masquerade Witness To Be Heard On November 20 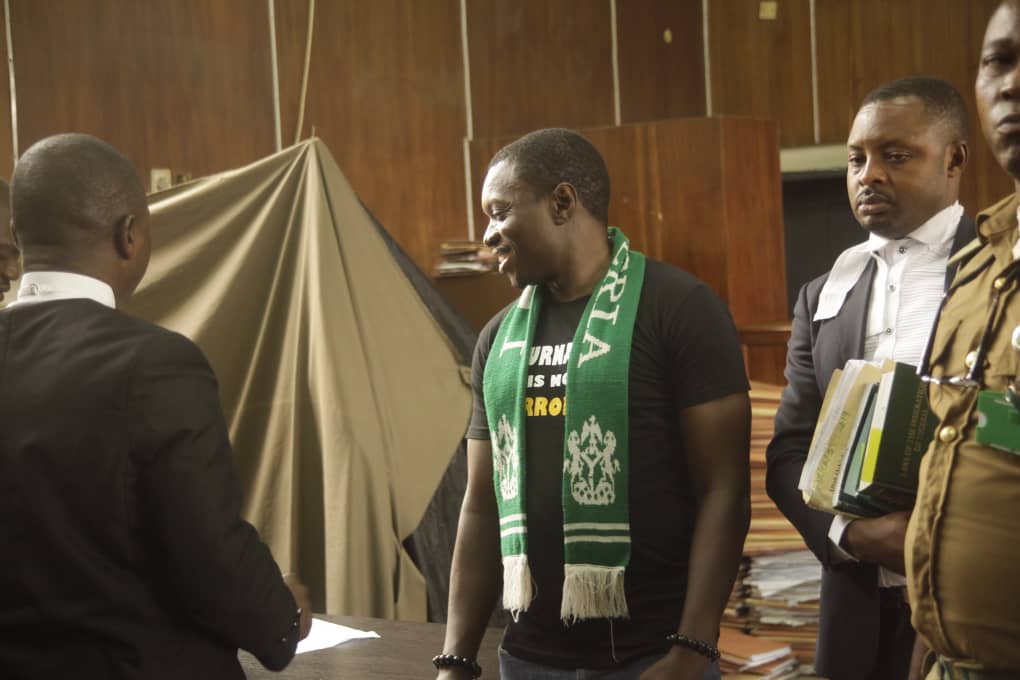 The first testimony of masked witnesses against journalist and rights activist, Agba Jalingo who is facing trial for alleged terrorism, conspiracy, treasonable felony and attempt to topple the Cross River State will be heard on Wednesday, November 20th as his secret trial commences.

This was part of the ruling of Justice Simon Amobeda of the Calabar division of the Federal High Court on Thursday where he also ordered that Mr. Jalingo be remanded at the medium security custodial center in Calabar till then.

The Court had on Tuesday upheld its ruling of October 23, 2019 which granted leave for the prosecution to mask its witnesses and the trial to proceed in secret. When the matter was called up on Thursday, the defense counsel, Attah Ochinke moved two motions filed earlier in the week but the Court adjourned the hearing of the applications to November 26th at the instance of the prosecuting counsel, Dennis Tarhemba whose denial that he had not been served any of the processes filed by the defense left the defense in shock.

However, both applications were served on him in Court.

The case was stood down till noon. However, upon resumption, the public and press were asked out of the Courtroom as the secret trial was scheduled to commence. But, following the defense counsel’s position that they were not ready for cross examination, the matter was adjourned until November 20th.

He told journalists outside the Courtroom that: “We re-presented the application for bail and we brought in a second application. Both applications are not ripe for hearing and on that basis, the Court adjourned them until when they are ripe.”

On the secret trial, he averred that: “Actual trial has been slated for the 20th of November. On that day, we will come ready to commence trial.”

The prosecution counsel however, directed journalists to meet the Court’s registrar for the records of proceedings for the day. Also, an armored personnel carrier with a mounted gun was parked at the entrance to the Court while everyone was searched while going in and out of the Court premises.

Also, a truckload of State Security Services were at the Court premises. Mr. Jalingo had in July, published an article where he demanded the Cross River State government comes clean on the whereabouts of the NGN500 million approved and released for the floating of the Cross River Microfinance bank.

In August he was invited by the Cross River State Police command for an interview based on a petition against him bordering on his article.

The interview was first slated for August 19, 2019. It was later rescheduled for August 26th and September 3, 2019. Mr. Jalingo went public with his decision to honor the invitation.

However, he was arrested in a gestapo styled operation by Police officers in his Lagos residence on August 22, 2019. He was then driven by road to Calabar, the Cross River capital where he arrived on August 24, 2019.

He was detained for 32 more days at a police black site facility with limited access to him until his arraignment on September 25, 2019 for the hearing of his bail.

The trial has suffered so many setbacks with the Court denying admitting Mr. Jalingo to bail on two occasions; October 4th and October 30th.

NoGoFallMaga: The Value of Your Hacked Personal Computer (PC)

Computer save become an intricate part of our lives, from desktops to laptops, one would be hard-pressed to find

Two Minor Reunite With Parents After Aunty Comfort Chased Them Out