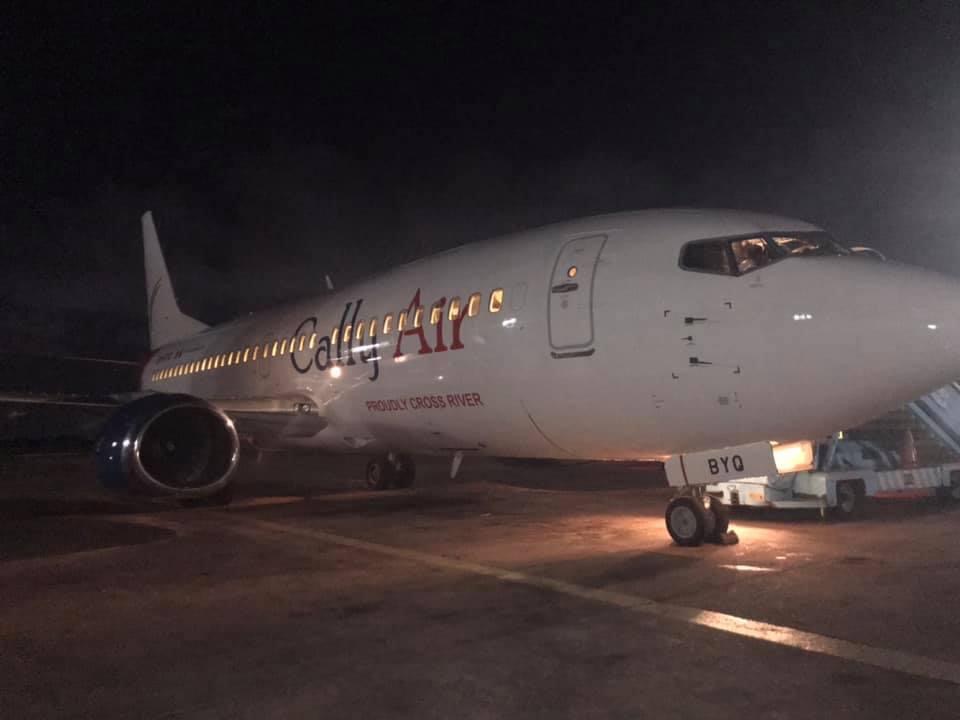 The Cross River State Government on Tuesday, took delivery of the second Boeing 737 – 300 purchased for the floating of Cally Air, a government initiative in partnership with Dana Air. The first had arrived weeks ago.

The plane touched down the Murtala Muhammed International Airport Tuesday night with several government functionaries on ground to receive it including the Governor, Benedict Ayade. His spokesman, Mr. Christian Ita who confirmed the arrival of the aircraft described the procurement of the aircrafts as “sheer financial wizardry for a State with the least allocation in the country,” adding that, “if this is not intellectual money at work, then I don’t what else to call it.”

But, the fanfare to welcome the aircraft underlines the criticism the project has suffered with Mr. Ayade in an exclusive telephone interview with CrossRiverWatch’s Agba Jalingo last week addressing some the issues and sharing the ideology behind the project and others.

Mr. Ayade said the operational philosophy of the airline was not just passenger based only and disclosed that it will fly the Calabar – Obudu route after the completion of the Obudu International Cargo and Passenger Airport which is under construction.

From fashion to agriculture, education, solid minerals and health, the Governor posited that a lot had gone in the planning phase to ensure all projects of his administration work and were integrated in a network that will fulfill his dream of an alternative revenue base for the State.

Explaining the nexus between the some of the projects in his administration in the agro, educational and transportation sectors, he averred that: “If someone brought out clothes that are off season. Let’s say they brought out summer clothes, as it goes into winter, they start selling them at a discounted price. So, the same shirt that was selling for USD3,000 you will now get it for USD300. They have those outlets in Dubai, Texas, every big city has an outlet for designers. So, Obudu will become an outlet for designers. Instead of going to Dubai to go and buy designer clothes, the outlet will now be in Obudu which will now be the designer hub for all designers for Africa.”

On agriculture, he said; “The aircraft carriers meat and agricultural products to the gulf and returns through Europe and picks all the garments from designer shop. So, you will now see big big warehouses coming up from the northern senatorial district even up to the central as final outlets for some of these designer products.”

An advocate of government doing business, Governor Ayade did not leave out the solid minerals subsector and their link with the airport project in Obudu. “In terms of solid minerals exports, essential minerals which you find around the whole of the north-central; Nassarawa, Kogi, Taraba; those essential metals can actually, officially under solid minerals mining be shipped by cargo planes like Antonovs, Russian Antonovs and export from there. So, the cargo, the airport is not just looking at passengers coming from Calabar to Obudu, Obudu to Calabar, no no no no, it is majorly to drive massive international trade,” he said.

Harping on the African Continental Free Trade Agreement, he averred that; “You know with the African Continental Free Trade Area, Africans can trade with themselves. You know the current footfall for Africa trading with itself is less than 30 percent. So, with AFCFTA and with free movement of goods and services, it is pertinent that this cargo plane can move and feed the whole of West Africa market. With the king grass coming in, you can now practice professional ranching, feed these cattle and ship them out. Today, Bahrain is the major exporter of goods to Saudi Arabia. They don’t have oil but today, the money they make from selling goods is almost equivalent to the money made from selling crude oil. So, it is a perception, it is better to aim high, have a dream of how am I leaving office? How am I leaving Obudu? How am I leaving Cross River, How am I leaving northern senatorial district?”

“You will be exporting these and return other goods in. The university which is the British Canadian University will open and it has only four faculties; medicine, law, engineering and artificial intelligence and management sciences that will attract almost 8,000 students; it has a huge population and a huge footfall, you have their families coming to visit their loved ones in the university; then you have the hospital, it is a seven star international hospital built by German Siemens in partnership with Coscharis. Coscharis is their representative in Nigeria.

“So, with that hospital in place, it will also create a lot of traffic into Obudu and then the marina and safari resort been proposed in Obanliku will also attract traffic. The exchange rate between Naira and Dollar can only get worse so a lot of people will not be able to travel out for vacation with their families. So, medical tourism, agricultural tourism, educational tourism by way of the university and the proper tourism by way of patronizing the golf resort, the marina resort, Obudu safari resort, we can always get Calas Vegas up and running as well; so all of that is to help attract spending power into the economy because the civil service cannot work, you can see several states have begun retrenchment.”

On the operational strategy, he disclosed that; “Cross River State is not in the management of this aircraft. I am not the one who is going to hire the hostess or to find the load master. I took it off Cross River, strictly professional; it is just to find the terms of transaction and we didn’t borrow one Kobo.

He denied claims that the purchase was done with local government funds, disclosing that “since 2017 when we planned to buy the airplane, I started doing savings. The Kobo of an individual is not there, it is 100 percent government funds. This is owned by Cross Riverians, it is owned by us, so the other people will only take operating fee. We have a dedicated account from where we can build additional fleet.

“It is going to be a joint management but we are not in operational management, we are in administrative management and we are going to ensure that the accounting component, Cross River State is not shortchanged.”

Both aircrafts have an average age of over 21 years, a subject of criticism for the airline. And, responding to this and questions about their safety and insurance, he said; “To buy, I had to do my research, the safest aircraft in human history is a Boeing 737 – 300. How many have been manufactured? How many have had accidents? The most reliable in the world’s history is a Boeing 737 – 300 and it has a passenger capacity of 144 with a cargo hold that carries so much cargo. We have advantage, when it comes to turbulence, when a big aircraft enters turbulence, you don’t feel it.”

By Itam Offor The Cross River State House of Assembly has confirmed the appointment of Mr. Francis Odachi Ekpo

Listen To The Podcast The Headlines: Advert by CRWatch :Place Yours Non-Release Of Record Of Proceedings, An Infringement Of